“Sex and the City” revival “And Just Like That” finally has a premiere date and teaser trailer from HBO Max.

On Friday, the streaming service announced that the sequel series to HBO’s “Sex and the City” will debut its first two episodes on Thursday, Dec. 9. “And Just Like That” will span 10 episodes, with the remaining eight rolling out weekly on Thursdays after the premiere.

The video, which you can view above, also showed the return of fan-favorite characters, like Stanford (played by the late Willie Garson), who is enjoying a stroll in NYC with Carrie; Mr. Big (Chris Noth), who is kissing his wife in their kitchen; and the debut of some new friends, including Sara Ramírez’s character, Che Diaz, who looks like a budding integral part of Carrie’s life at this point.

“And Just Like That” began production in June and some cast members — including SJP — have already wrapped filming on the series.

HBO’s “Sex and the City” was created by Darren Star based on the book of the same name by Candace Bushnell.

“And Just Like That” debuts Thursday, Dec. 9 on HBO Max. 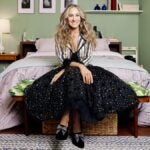