Evan Handler has pretended to have sex with lots of women. His wife, Elisa Atti, knows all about it.

Before the 48-year-old regular on Showtime’s edgy comedy series “Californication” gets busy on-screen, Atti runs lines with him. And when the torrid scenes featuring Handler, best known as Charlotte’s bald husband on HBO’s “Sex and the City,” are broadcast, Atti often snuggles up with him to watch.

But there’s one thing the couple rarely does together: talk about the fake sex on the day Handler actually has it. 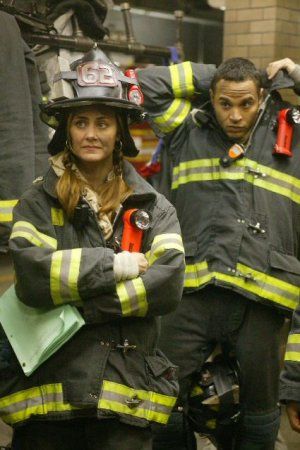 Diane Farr spent 13 episodes on FX’s wry firefighter drama “Rescue Me” having a steamy affair with a man she described to her husband as “super hot”: actor Daniel Sunjata (pictured at left).

But, just as she did when she nibbled the ear of a co-star on CBS’ crime series “Numb3rs,” Farr followed a self-imposed rule: If feigning lust inspires the real thing, save the sizzle for later.

“You have to make sure that when that button is pushed,” Farr says, “you bring home the response.”

Or else. For actors in committed relationships, love scenes can be the craft’s most treacherous terrain. It doesn’t matter that the heavy breathing summoned by the word “Action!” is often awkward and humiliating to perform, what with dozens of crew members on the set, counting down to lunch break.

Sex scenes still can hammer away at a couple’s sense of trust, revealing old fissures and making room for more.

Think of a humid greenhouse, which fools plants into pumping out the plumpest, juiciest tomatoes. That’s what film and TV sets can do to emotions. Actors often work 20-hour days, sometimes far from home, fending off boredom between takes by trading intimacies.

The bonds that form may be fleeting, but they’re intense.

“It’s kind of like if you go to war with somebody,” says actor Scott Conte, a visiting assistant professor at UCLA’s School of Theater, Film and Television.

“I’ve done one-day shoots where I’ve gotten to know the person in a more intimate way than some acquaintances I’ve had in my life because you’re asked to show all these emotions in such a short amount of time. It almost makes you feel like you’re further along in the relationships than you actually are.”

The better the actor, the more convincing the sex scene — and the more potentially wrenching for the actor’s mate. No wonder so many couples devise rituals – some subtle, others more concrete — that they hope will ease the pain.

Where there’s smoke, yes, there’s often a spark. But that doesn’t mean you have to burn the house down. Thus: ground rules.

Actor Michael B. Silver, whose many credits include recent episodes of the series “Heroes” and “Brothers and Sisters,” fell in love with Katie Mitchell in an acting class after the two did a sex scene from 1977 film “Looking for Mister Goodbar”; they later married. So they know better than most that when you engage your libido in the service of drama, you sometimes can’t unring that bell.

For that reason, Mitchell and Silver have always been careful about how they talk with each other about their love scenes. Even scripted passion can stoke real chemistry, they say. You’d have to be dead not to react.

Still, discretion is key. Silver might mention whether his co-star was flirty or shut-down, but he skips the gory details. Mitchell returns the favor.

“We both know it’s not natural to be in bed with somebody or to kiss somebody for months where the whole thing is you’re in love and then turn it off when you leave the rehearsal hall,” says Mitchell, whose credits include TV series “Criminal Minds” and “Bones.”

“It’s not natural. And yet, you can do it. Ultimately the technique is more about ethics. If I do get turned on by someone while I’m kissing them, [I know] that’s all it was. And then I just walk away.”

Of course, there are those — some of them A-listers — who didn’t just walk away. Angelina Jolie and Brad Pitt infamously ignited their romance on the set of the sexy action film “Mr. and Mrs. Smith” (while Pitt was still married to Jennifer Aniston). Richard Burton met then-married Eilizabeth Taylor on "Cleopatra." Katharine Hepburn met then-married Spencer Tracy on “Woman of the Year.”

David Duchovny, who plays a sex-addled novelist in “Californication,” checked himself into rehab for sex addiction and separated from his wife, actress Tea Leoni, after the show’s second season.

Asked about performing sex scenes recently, Duchovny (who has since reconciled with Leoni) told reporters: "You punch in the clock, you go in to work, and you’re playing a character. Personally, I’m not somebody that takes it home."

Maybe that was the problem.

This article was also published in Los Angeles Magazine.