As production begins on Season 2 of Netflix’s hit fantasy series “Shadow and Bone,” new faces have been added to the Grishaverse.

Three members of the Season 1 cast have also been promoted to series regulars — Danielle Galligan, who plays Nina Zenik; Daisy Head, who plays Genya Safin; and Calahan Skogman, who plays Matthias Helper. Additionally, Daigan Fryklind has been promoted and will serve as co-showrunner with Eric Heisserer, who was showrunner on Season 1.

According to metrics Netflix released last year, more than 55 million member households watched at least two minutes of the show’s Season 1 within the first 28 days of its release on the streamer. It also made Netflix’s Top 10 list in dozens of countries, landing at No. 1 in several countries, including the U.S. 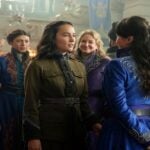 Also Read:
‘Shadow and Bone’: Behind All That Era-Skewing, Embroidery-Centric Attire

Here’s the logline for Season 1 of the show, based on Leigh Bardugo’s books: “‘Shadow and Bone’ finds us in a war-torn world where lowly soldier and orphan Alina Starkov has just unleashed an extraordinary power that could be the key to setting her country free. With the monstrous threat of the Shadow Fold looming, Alina is torn from everything she knows to train as part of an elite army of magical soldiers known as Grisha. But as she struggles to hone her power, she finds that allies and enemies can be one and the same and that nothing in this lavish world is what it seems. There are dangerous forces at play, including a crew of charismatic criminals, and it will take more than magic to survive.”