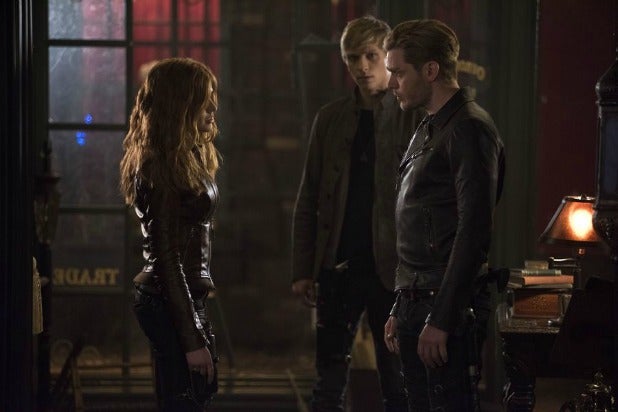 Katherine McNamara, Will Tudor and Dominic Sherwood on "Shadowhunters"

(Spoiler alert: Please do not read on if you haven’t watched Monday’s “Shadowhunters”)

“Shadowhunters” viewers might not believe what they’re about to see.

Dominic Sherwood, who plays Jace on the Freeform series, told TheWrap that tension continues to build between his character and villain Sebastian (Will Tudor) as the show nears the Season 2 finale. Indeed, this is likely related to the cast revealing at Comic-Con that a key character will die in the finale.

“It’s dark — we’re approaching the end of the season now, so we’re coming to this big climax,” Sherwood said in an interview with TheWrap. “It’s one of those [moments of], ‘Oh, my God — that’s happening? Wow, cool!’ It’s pretty intense, and I think people are going to be pretty shocked.”

“It’s going to start ramping up more and more and more, and we’ll discover more about who Sebastian is and why he’s such a creepy mo-fo,” the actor continued. “There’s a lot of information to come in the next couple of episodes — a lot of passion, a lot of emotion, danger, heartbreak. I was heartbroken when I read the scripts, so I’m excited for people to see it.”

Fans recently got to experience a popular moment from Cassandra Clare’s book series when Jace and Clary kissed on the show during their visit to the Seelie Court, and Sherwood was aware that viewers’ expectations would be high.

“When you do the big scenes that people are waiting for in the books, there is a lot of pressure to get them right,” Sherwood said. “You really have to ground yourself and take some time and make sure we do justice to the fans who’ve been there since well before this was even a TV show, since Cassie wrote these books.”

Sherwood wouldn’t reveal much about what’s next for Jace and Clary, but it’s clear that trouble is afoot for Clary and Simon (Alberto Rosende), who recently put their romance on ice.

“Clary is so incredibly loyal, as is Simon, so that’s why this is going to be so hard for Simon,” he said. “When he loves, he loves with his entire heart.”