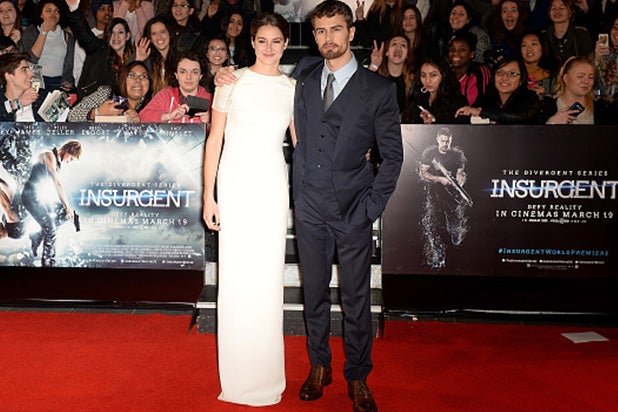 No one said being a movie star is glamorous all the time, and that’s especially true for the stars of the futuristic sequel, “Insurgent.”

While the actors looked amazing on the red carpet at the film’s world premiere Wednesday in London, Shailene Woodley and Theo James admitted filming the follow-up to 2014’s “Divergent” was brutal at times.

“It was loads of fun. The thing about this film is it looks like [we are running for] seven minutes but in reality, we were running for two months,” Woodley told the Irish Independent.

Being winded was the least of James’ concerns. “I got hit in the face during the train sequence so I got clocked, but the film makes you feel tough,” the British actor joked.

While she plays leather-clad tomboy Beatrice “Tris” Prior in the film based on Veronica Roth‘s YA novel, Woodley wore a sophisticated ivory Ralph Lauren Collection gown with an open back to the event at the Odeon cinema in Leicester Square.

Set in a future-dystopian world where a micro-society has been divided into factions, Tris (Woodley) is a “divergent,” someone whose innate abilities place her into more than one of those categories. Following the massacre of her parents and the other members of the altruistic Abnegation faction, Tris — along with boyfriend Four (Theo James) and the not-entirely-trustworthy Peter (Miles Teller) — are hiding out from wickedly ambitious Jeanine (Kate Winslet) with the gentle souls of Amity.

Octavia Spencer, Naomi Watts and Ansel Elgort also star in “Insurgent,” which opens in the U.S. on March 20.

“Harry Potter” had four houses at Hogwarts, “Twilight” had two hunks competing for the affection of one woman, “The Hunger Games” has 12 districts, and “Divergent” — the next YA franchise Summit is preparing to unleash — has five factions. Here are the faces to know in the bravest bunch of them all.

Shailene Woodley as Beatrice 'Tris' Prior -- the teenage heroine in author Veronica Roth's YA novels. She chooses to join the Dauntless faction, although she is Divergent, meaning she can fit into a variety of factions.
View In Gallery