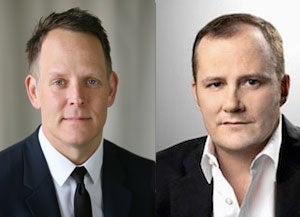 Universal Pictures on Wednesday confirmed a restructuring of its marketing department, with top-end publicist Michael Moses (left, at left) moving up to the position of co-president of marketing.
Eddie Egan (left, at right), president of marketing since 2007, will remain in charge and in his same position — though they are co-presidents, Moses will report to him.
“Michael is an incredibly gifted strategist,” Egan said in a statement. “I trust his instincts and know he has the creative capacity and the experience to help me lead this team.”
Meanwhile, Maria Pekurovskaya (below, right) gets moved up to head creative advertising in an executive VP role. 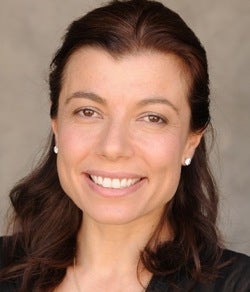 “We identified Maria as a huge talent from very early on, and her abilities have continued to grow in the nearly 10 years she’s been at the studio,” Egan said.
Other moves include the poaching of Overture Films creative advertisingexecutive Jackson George, who will fill the role of senior VP of creative advertising for Universal.
As for the chain of command, George and fellow senior VP Scott Abraham will report to Pekurovskaya.
Frank Chiocchi, who also has an executive VP of creative advertising title, will continue to answer directly to Egan, as will Pekurovskaya and Moses.
Egan, in turn, will report to studio chairman Adam Fogelson and co-chairman Donna Langley.
x
Looks like you're enjoying reading