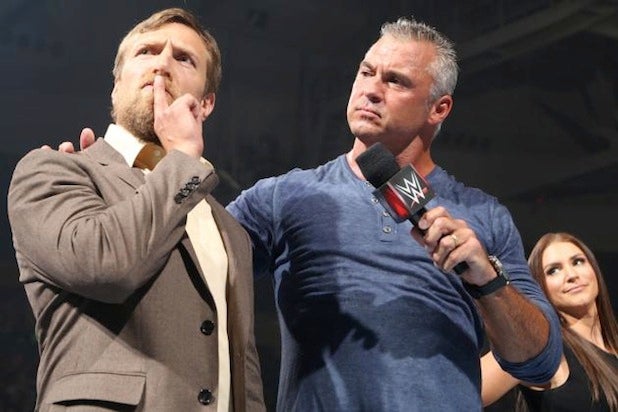 WWE held a World Cup Tournament to (as we were constantly reminded) “determine the best in the world” Friday at the “Crown Jewel” pay-per-view event in Saudi Arabia. Somehow — and for some reason — “SmackDown Live” General Manager Shane McMahon won the trophy.

If that sounds confusing to readers unable to watch the workday event, it is, because Shane O’Mac wasn’t even booked to wrestle in the tournament. Hell, he’s not even a real wrestler. The son of WWE chairman Vince McMahon subbed himself into the finals vs. “Raw” representative Dolph Ziggler when “SmackDown” finalist The Miz (storyline) injured his leg.

As if that wasn’t a weird enough booking decision, Shane then won the damn match — pretty quickly and easily. WWE fans didn’t dig any of how that played out. Check out some of the choice Twitter reactions below.

Shane McMahon is the ‘best in the world’

.@adampacitti & I have said it for years, but FINALLY we have confirmation that Shane McMahon is the best wrestler in the world ever. We can all sleep well tonight #WWECrownJewel #WWECrownShite

WHAT THE HELL WAS THAT?!! SHANE MCMAHON ?! He's stealing the SPOTLIGHT. SPEECHLESS.#WWECrownJewel #WWE

Shane McMahon wins a tournament he wasn't in, is Best In The World.

WWE going 1000% in on this event being non-canon come Monday.

Shane McMahon won a tournament to determine the best wrestler in the world, because while this company offends a great many people, their booking is only truly designed to anger me, personally.

I thought the Universal Championship match outcome was bad. WWE said "Hold my beer" and all of a sudden Shane McMahon wins the World Cup tournament.

Someone really wrote down "Shane McMahon becomes the 'Best in The World' at Crown Jewel." and thought it was a good idea

Shane McMahon winning the “Best In The World” … emm .. pic.twitter.com/BPs3tZ5Bih

Nothing says “Glorified House Show” like Shane McMahon beating Dolph Ziggler in a match that was supposed to be taken seriously. Maybe that was WWE politely giving Saudi Arabia the middle finger ????????‍♂️

Shane McMahon is the best in the world????? Why? Who booked this crap? #CrownFool pic.twitter.com/URUGVNF5dv

#WWECrownJewel
Instead of holding this tournament thing, WWE could have directly handed the #WWEWorldCup to Shane McMahon.

So Shane McMahon is supposed to be the Best in the World?

SHANE MCMAHON won the BEST IN THE WORLD tournament…#WWECrownJewel pic.twitter.com/MkuceFiszG

Trust us, there was much more negativity where those came from — we’re not even allowed to post the profane ones.

You may have noticed that the WWE Universe isn’t overly thrilled about how the Universal Championship match, the World Cup finale’s lead-in, played out either. Click here to see how that one went down.

“Crown Jewel” is currently winding down on WWE Network.