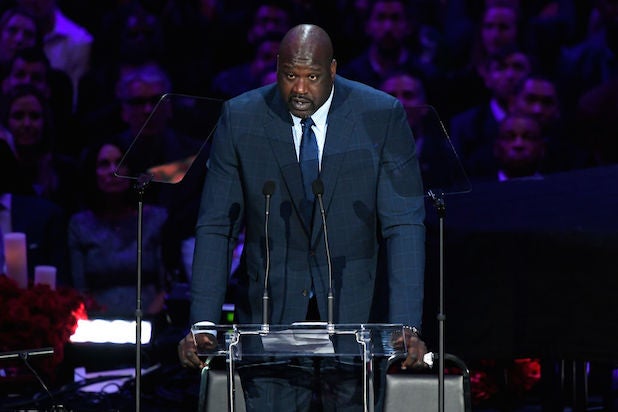 Lakers legend Shaquille O’Neal paid tribute to former teammate and “little brother” Kobe Bryant in a poignant and often hilarious eulogy on Monday afternoon at Staples Center in Los Angeles, where the two won three titles together at the turn of the century.

O’Neal called Bryant, who was six years his junior, a “loyal friend and true Renaissance man.” The two had a “complex relationship,” O’Neal said, that reminded him of the dynamic songwriting duo of John Lennon and Paul McCartney. Together, they were able to “play some of the greatest basketball of all time” and reach the peak of their profession, in the same way the two former Beatles did.

“We always maintained a deep respect and love for one another,” O’Neal said.

Also Read: Vanessa Bryant Says Kobe and Gianna 'Couldn't Be on This Earth Without Each Other' in Heartbreaking Eulogy (Video)

The Hall-of-Fame center included a few lighthearted jokes — a welcome move after the emotional few hours that had immediately preceded. In the opening minute of his speech, O’Neal said Bryant had once compared himself to a man playing chess, while all other players were playing checkers. O’Neal, he said, joshed in reply: “I said ‘I guess so, Kobe — I don’t know how to play chess.'” Later, O’Neal said he’d look after Bryant’s wife Vanessa and three surviving daughters — but said he’d be sure to not give them any advice on how to shoot free throws.

O’Neal brought the house down a few minutes later.

The line had several of the NBA legends in the audience laughing out loud.

Also Read: Jimmy Kimmel Delivers Tearful Tribute to Kobe Bryant: 'All We Can Do Is Be Grateful for the Time We Had' (Video)

Bryant and O’Neal both joined the Lakers in the summer of 1996, and would later go on to win three NBA Finals in a row between 2000-2002. The duo made one more NBA Final in 2004 before O’Neal was traded in the offseason. Their time together in Los Angeles included countless reports of bickering and — at least on one occasion — a near fistfight in practice. On Monday, O’Neal said much of that was overblown, and they’d often look at each, wink, and say “let’s go whoop some ass.”

In recent years, O’Neal said he could see Bryant’s heart was filled with the most pride by being a devoted family man.

He concluded the memorial service on an uplifting note:

“Mamba, you were taken away from us way too soon. But now it’s time for us to continue your legacy,” O’Neal said. “You said yourself that everything negative– pressure, challenges — is all an opportunity for me to rise. So we take that sage advice to now rise from anguish, and begin with the healing. Just know that we got your back, little brother.”

You can watch most of O’Neal’s speech below: