Inspired by trending dance crazes on social media, “Dancing with Myself” will see a group of ordinary people compete each week in a series of high-energy dance challenges designed and demonstrated by the show’s celebrity creators Shakira, Liza, and Shaquille.

Kostek, who is a former NFL cheerleader, will help demonstrate each week’s new dance challenges with the creators.

Contestants will have a short time to learn the new routines before performing in front of a live studio audience. Creators will choose their favorites to advance to the next round, but the studio audience will decide the best dancer of the night, and who goes home with a cash prize. 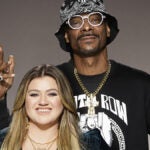 Also Read:
Kelly Clarkson Believes ‘American Song Contest’ Can Unite the Country: ‘This Show Is for Everyone’

Guest celebrities, who have not yet been announced, will also submit challenges for contestants. No premiere date has been revealed yet for the series.

Koshy is the co-creator, executive producer, and star of her own YouTube Originals series “Liza on Demand,” and recently co-hosted “Dick Clark’s New Year’s Rockin’ Eve Special.” In December 2020, she signed an overall deal with Westbrook Inc., the media company founded by Jada Pinkett Smith, Will Smith, Miguel Melendez, and Ko Yada, to develop film and television projects.