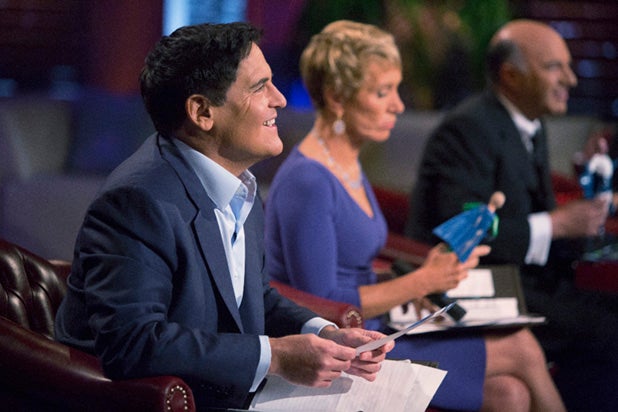 SHARK TANK - "Episode 625" - A scientist from Tampa, FL invented a very life-like, synthetic human cadaver that will make medical testing more effective; two friends from Seattle, WA hope the Sharks won't turn their idea to make personalized super hero action figures into a super zero; three ladies from Philadelphia, PA have an affordable online service to help you quickly achieve a high-end interior room design; and two men from Commerce Township, MI hope the Sharks will invest in their sunscreen full-body misting device. Also, an update on Judy Edwards and her son, Bobby Edwards from St. George, UT, who invented the Squatty Potty, a healthier way to get things moving along when you do your business in the bathroom, that Barbara Corcoran invested in during Season 6, on "Shark Tank" airing FRIDAY, MAY 8 (8:00-9:00 p.m., ET) on the ABC Television Network. (ABC/Michael Desmond) MARK CUBAN, BARBARA CORCORAN, KEVIN O'LEARY

No one expected ABC to compete last night, but the Disney-owned broadcaster sure didn’t want to see a “0” in front of “Shark Tank’s” key demo Nielsen rating either.

Even most Fox shows ticked up versus last week — so that’s… something.

NBC was first in ratings with a 4.6 rating/16 share in the advertiser-coveted 18-49 demographic and in total viewers with an average of 14 million, according to preliminary numbers. Due to the nature of live sports, those numbers should be considered subject to change.

CBS was second in ratings with a 1.8/6 and in viewers with 10.5 million. The conclusion of the New York Giants-Seattle Seahawks game claimed the first 30 minutes of the 7 o’clock hour for the east coast. Along with some “60 Minutes” starting 7:30 for the eastern time zone, that first primetime hour averaged a 3.6/14. The next one, in which the conclusion of “60 Minutes” ran into “Wisdom of the Crowd,” had a 1.6/5 and 10.8 million viewers. At 9, the end of the Jeremy Piven drama and start to “NCIS: Los Angeles” combined for a 1.0/3 and 7.7 million viewers. The final hour of CBS’ prime — the finish to the “NCIS” spinoff and beginning of “Madam Secretary” — received a 1.0/3 and 7.4 million viewers.