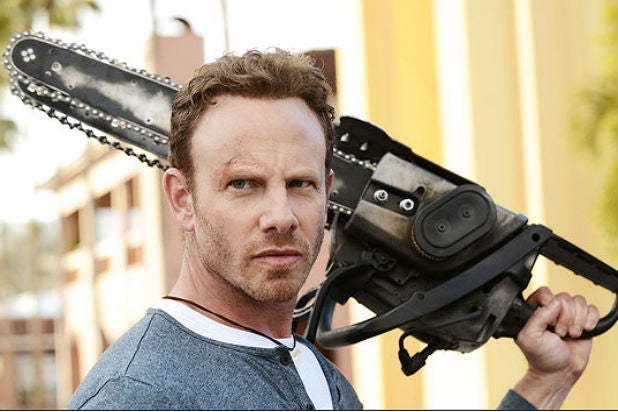 Keep an eye on the skies this August — and another on the surf report. The fifth installment of Syfy’s campy “Sharknado” now has a debut date.

The summer TV movie will premiere on Sunday, Aug. 6 at 8/7c on the NBCUniversal cable channel, Syfy revealed on Friday.

Here’s the official synopsis for “Sharknado 5,” which at this point is just a working title:
The pop culture phenomenon “Sharknado” blows into town this summer… and this time, the shark-infested storms pick up wind as the world braces for the inevitable – a global shark takeover. Will our chainsaw-wielding hero Fin Shepard (Ian Ziering) and partner in crime April Wexler (Tara Reid) save the world from this jaw snapping-nado…again?

And here are some other new premiere dates and descriptions, all in Syfy’s own words:

“Blood Drive” – Series premieres Wednesday, June 14 at 10/9c
Get uncomfortable…! In the tradition of classic grindhouse movies, “Blood Drive” is a new series soaked in high-octane chaos and just barely approved for television. After Los Angeles’ last good cop (Alan Ritchson) is forced to join a twisted cross-country death race, his only hope of survival is a dangerous femme fatale who has the need for speed (Christina Ochoa). Oh, and forget gasoline… these cars run on human blood! The series is from Universal Cable Productions and executive producers John Hlavin (“Underworld Awakening”), David Straiton (“Bates Motel”) and Frederik Malmberg (“Let Me In”), along with producer Mark Wheeler (“Becoming”). James Roland (“Weeds”) created the project and is a co-executive producer on the series.

“Live From Comic-Con” – Coverage runs Thursday, July 20 – Saturday, July 22 at 11/10c
For the second year in a row, Syfy telecasts live from the heart of San Diego Comic-Con. Bringing the hottest party of the summer to the fans, with direct access to the biggest stars, breaking news, insider party coverage, exclusive content and sneak peeks of the most anticipated films and TV series, each night will bring you the news you need to know from the ‘Con.

Also Read: How Syfy's 'Cosplay Melee' Captures the Spirit of the Cosplay Scene

“Dark Matter” – Season 3 premieres two episodes back-to-back Friday, June 9 at 8/7c (then single episodes air weekly on Fridays at 9/8c)
Based on the graphic novel created by Joseph Mallozzi and Paul Mullie, “Dark Matter” centers on an intergalactic crew who awaken on a derelict spaceship with no memories of who they are or how they got there. After the EOS 7 space station is destroyed, the survivors fight to stay alive and find the rest of their crew.

“Face Off” – Season 12 premieres Tuesday, June 13 at 9/8c
The award-winning competition series “Face Off” features innovative artists competing for a grand prize and top honor of being Hollywood’s next great special effects make-up artist. McKenzie Westmore, a member of a multigenerational family dynasty whose name is synonymous with the make-up effects field, returns to host.

“Killjoys” – Season 3 premieres June 30 at 8/7c
After sustaining serious personal losses, our trio of interplanetary bounty hunters must come together and prepare themselves for what lies ahead. Tension and tragedy loom over the J Star System as they struggle to assemble an army and prepare for battle.