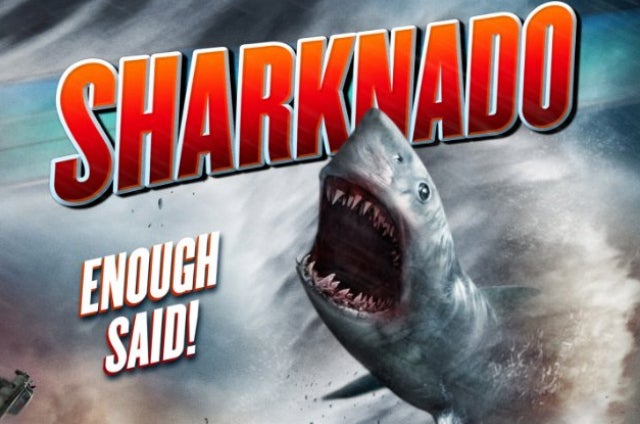 The first thing you should know about the man who penned "Sharknado" — the most famous shark-storm movie of all time — is that his name is Thunder.

Thunder Levin did not come up with the idea for "Sharknado," whose title was actually a throwaway joke in the 2012 TV movie "Leprechaun's Revenge." It may still be a joke, but with the movie's constantly improving viewership — 1.4 million for the premiere, 1.9 million for the encore and 2.1 million viewers the third time it aired — "Sharknado" is no longer a throwaway.

Also read: 'Sharknado' Swag Coming to a Store Near You

Another showing is scheduled for 7 p.m. Aug. 22 — followed at 9 by the premiere of, yes, "Ghost Shark" — and "Sharknado" will have a one-night-only screening in select theaters around the country at midnight Friday.

Yet Levin wasn't convinced at first.

The Asylum — the production company behind "Sharknado," which sells a lot of movies to Syfy — approached Levin to write the script called "Shark Storm," which was intended to be a straight sharks-attack-during-a-storm kind of movie. Levin was not interested. A month later, The Asylum brought a different title to Levin: "Sharknado" — a film about a tornado full of sharks, which makes far more sense.

Levin was in, under one condition: He told Asylum, "It has to be ridiculous, it has to be over the top. We have to have fun with it."

Also read: Syfy's 'Sharknado' Coming to Theaters for One Night Only

A month and very few script notes later, the screenplay was complete. But by last October, Levin was out of the process.

Due to a scheduling conflict, he chose another project: shooting a film called "AE: Apocalypse Earth." In January, over the course of 18 days, "Sharknado" was shot. Levin did not watch the finished product until its premiere on Syfy.

What Levin saw on his TV, he was mostly pleased with. Though he said, "Obviously when you write a script and you don’t direct it, it never looks like it does in your head."

One scene that did look like what was in Levin's head: the film's climax — a scene he had to fight for. Yes, it was the scene where Ian Ziering jumps into the mouth of an enormous shark and chainsaws his way out the killer fish's stomach — only to turn back and pull a companion out, who was somehow still alive after being devoured earlier in the movie.

When TheWrap asked Levin why that companion, Nova (Cassie Scerbo), undergoes an inexplicable name change at the end of the film with no explanation or payoff — he said that was not in the script. The character's name was Nova throughout his version.

"That was the one bone to pick I had with [the director]," Levin said.

At one point, the survivors are set to break into a flight school supply store (a Home Depot in the script) and a glorified extra's lips move — but no words come out. It's a short but noticeable clip where the other characters react, but there is no audio, no explanation.

When asked about the strange, blink-and-miss-it moment, Levin was surprised. He didn't catch it. Most people probably didn't. So while on the phone with TheWrap, Levin popped in his DVD copy and fast-forwarded. He grabbed the original script and thumbed through it. After a few minutes, Levin was able to match the moment up.

The character says, "This can't be a very sturdy building with a roof this big. What are we doing here?"

Levin has no idea why the audio was cut out. Nor why the pointless few seconds of video itself was not cut. The character has other lines in the film.

Also read: SyFy's 'Sharknado' Getting Sequel, and You Can Name It

The sequel for "Sharknado" has been announced, and fans will even have a chance to name it. Levin has a chance to write it again — deal pending — which excites him. After all, the setting is his hometown of New York City.

The biggest challenge as Levin sees it is sensitivity to a disaster movie set in the home of 9/11 and Hurricane Sandy. Levin — who earned a flat rate and nothing on the back end for the original — already has plans for "Sharknado 2." Big plans. He's holding most of those details of the fast-turnaround script fairly tight.

But not all of them.

"The very first thing that came to my mind would be a shark impaled on spike of the Empire State Building," Levin told TheWrap. "Sharks in the subway, and something with the Statue of Liberty."