“Sharknado 4” is stealing a page out of the “Star Wars VII” book — but unfortunately, not out of the actual screenplay.

The full title for the upcoming silly Syfy movie is “Sharknado: The 4th Awakens,” the NBCUniversal cable channel and producer The Asylum unveiled on Friday. We’d say this is an April Fool’s Day joke, but this is the “Sharknado” franchise we’re talking about.

The two-hour original movie will premiere on Sunday, July 31 at 8/7c. Here’s the official title card: 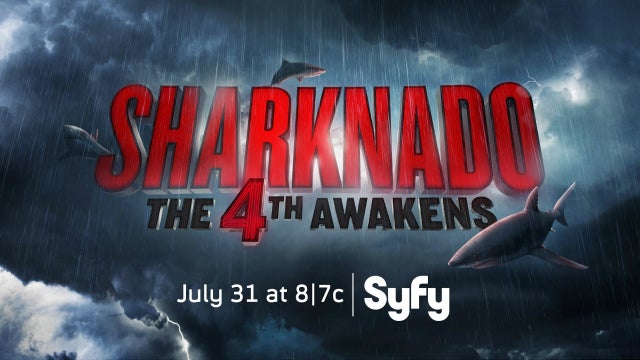 The fourth installment will take place five years after the East Coast was ravaged in last summer’s “Sharknado 3: Oh Hell No!” Fin (Ian Ziering), his family and the cosmos have been blissfully sharknado-free in the intervening years, but now sharks — and ‘nados! — are being whipped up in places (and ways) least expected, the companies teased.

Tara Reid is also set to return as April Wexler to reveal the outcome of the fan-voted #AprilLives or #AprilDies social campaign. David Hasselhoff (as Gil Shepard) and Ryan Newman (as Claudia Shepard) will also reprise their roles. New additions to the cast include Gary Busey, Tommy Davidson, Imani Hakim, Cody Linley, Masiela Lusha and Cheryl Tiegs. More actors will be unveiled soon.