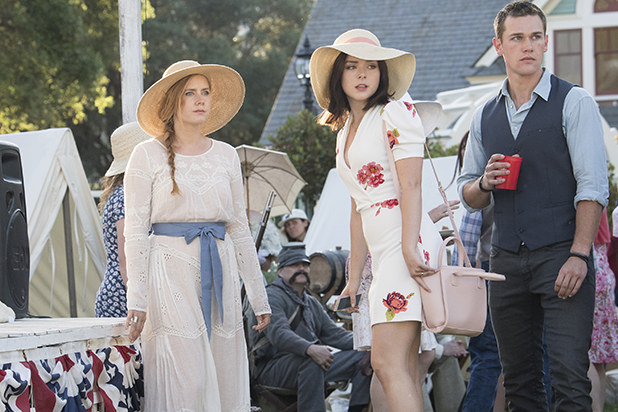 In the latest episode of “Sharp Objects,” the residents of Wind Gap, Missouri, convene at Adora Preaker’s (Patricia Clarkson) estate to celebrate the town’s founder with Calhoun Day — an idea that showrunner Marti Noxon told TheWrap began as a joke.

“It started as a joke, to be honest,” Noxon said with a laugh of the made-up holiday (Calhoun Day isn’t part of the Gillian Flynn novel on which the show is based). “Well… the kind of joke that in a [writer’s] room takes on its own life.”

Noxon said that she and the “Sharp Objects” writers were “fascinated” with the way the residents of Wind Gap “seemed to really identify with the South and the kind of Dixie flag flying and the story of Calhoun, the town’s founder.”

Also Read: Why 'Sharp Objects' Showrunner Named Each Episode After a Word on Camille's Body

The story goes that Zeke Calhoun — who Camille (Amy Adams) refers to as “our founding pedophile” — fought for the South in the Civil War while betrothed to Millie, a young girl from a Union family who Camille refers to as her “great-great-great-grand victim.” According to the tale, some Union soldiers traveled South to capture Calhoun “dead or alive.” But Millie, who at this point was pregnant, refused to give up her husband.

Camille says in the episode that it’s how Millie resists the soldiers that the townspeople love. The story ends with Millie refusing to reveal to the Union soldiers where Zeke is hiding, prompting them to tie her to a tree and do horrible things to her — “violations,” as Camille says — to the point of Millie losing her baby.

When Richard (Chris Messina) questions why this dark story merits a holiday, Camille counters, “We don’t have a lot of happy stories around here.”

“There’s a lot of talk about myth and fantasy and how that can influence towns, and your story versus your truth,” Noxon said. That idea bleeds into Camille’s own mythos: “The [Preaker] family has myths, the family has things that aren’t necessarily true on the surface.”

Camille tries to distance herself from her mother’s small town celebrations and conservative beliefs. She tells Adora that she’s not really part of Calhoun Day (and back in the pilot we saw a Barack Obama poster in her apartment). But when Adora forces her to reveal to Amma (Eliza Scanlen) her scars, Camille is forced to remember where she truly comes from.

Noxon said this line between what is real and what we tell ourselves is real reminds her of “fake news” as we know it today.

“The more we talked about the fake news of the town, the things that they told each other that just weren’t true, the more we kept focusing on the founder’s story, and the joke was that we were going to do Calhoun Day the musical,” she said, laughing again.

“But then we just started to realize there was something in bringing everybody in the town [together],” she added. “Like, it’s this life of Wind Gap, and the dynamics of the haves and the have nots, and Adora and the Preaker family as the kind of royalty of that family who controls the narrative being very juicy. And so eventually it was like, we’re doing Calhoun Day. We’re doing it.”