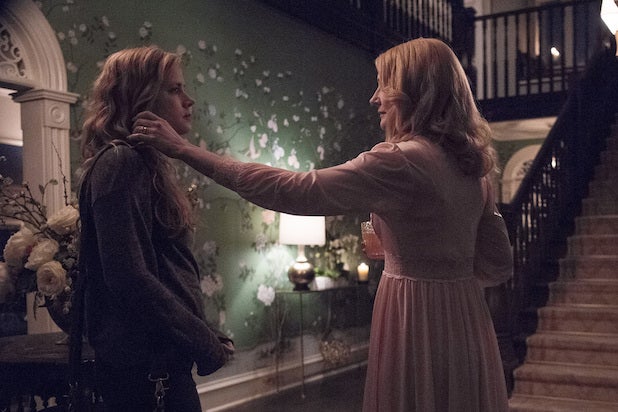 Patricia Clarkson will understand it if you find yourself loving her character, Adora, while watching HBO’s new limited series “Sharp Objects.” Though she can’t put her finger on exactly why you’d ever feel that way about Camille Preaker’s (Amy Adams) self-centered mother, Clarkson accepts that you might — because everyone she knows who has read the Gillian Flynn book the show is based on loves Adora.

“You know, she’s quite oddly a very well-known character and quite beloved [laughs],” Clarkson told TheWrap, in an interview ahead of the Sunday premiere of the TV adaptation of Flynn’s debut novel. (Yes, Flynn is known for her 2012 best-seller “Gone Girl,” but “Sharp Objects” came first.)

“People love Adora,” Clarkson says. “I don’t know why, but whatever, that’s not for me to judge [laughs]”

Clarkson also can’t judge your adoration because she didn’t experience that version of Adora firsthand, having agreed to Flynn’s request she not read the 2006 thriller once she signed onto the project, helmed by Flynn, showrunner Marti Noxon (“Buffy the Vampire Slayer,” “Dietland”), executive producer Jason Blum, and “Big Little Lies” director Jean-Marc Vallee.

Instead, she came at the character with an “open heart” and an “open mind,” ready to play her own version of the controlling, manipulative mommy, who refuses to endorse her adult daughter’s return to their small town in Missouri, as she reports on the murders of two little girls and looks into her own dark past.

“Whatever you want to come away with from Adora — ‘She’s harsh. She’s brutal’ — well yes, she’s all of those things, but to me she’s a woman who has been forsaken by a daughter with, in her mind, this exemplary life,” Clarkson said. “She’s a good mother to her other daughter. She is a good wife. She has a house. She has a life, even though it’s this very small town life. So I came at her with a good feeling, so to speak. I didn’t have preconceived notions and I loved the beautiful writing of Gillian Flynn.”

Clarkson says she and Adams “forged a relationship that could echo the better parts — if there are any — of Adora and Camille” while shooting. But the warm and fuzzy feelings were left off screen, as Adams’ character is hardly Adora’s favorite child.

The matriarch has two others: Marian (who died due to illness when she was a child) and the secretly wild 13-year-old, Amma, both of whom she smothers with love and likes to tend to in an extremely aggressive way. And then there is Camille, who doesn’t want to be babied or to let her mother love her in the only way she seems to know how.

“I don’t think you can play controlling. I don’t think you can play manipulative,” Clarkson said. “It has to come from an emotional life in the character. It has to be a character who is struggling to feel love for a child and how does that come out? A mother who is disappointed in the way her daughter looks, and acts, and behaves because, ‘Why isn’t she this beautiful daughter that she was supposed to be?’ And how does that manifest itself in that it’s reflecting back on me?”

“These are all very true, real emotions that mothers that are not as ill and complicated as Adora face,” Clarkson said, adding, “there is not a daughter on this earth who didn’t feel at times that they were disappointing there mother, they weren’t living up to their mother ideals.”

Clarkson doesn’t want to give anything away, but it’s hard to talk about her character without revealing she is “suffering from some mental illness.”

“You know, she has issues,” she said. “So she’s not really capable of viewing a child the way a normal mother would. And so it dictates a certain behavior that she sees as not abnormal, but normal. So for her it is about taking care. It is an obsession.”