Just six months since the end of one of the most topsy-turvy presidential races in American history, the story of Hillary Clinton’s stunning defeat could be making its way to the small screen.

“Shattered,” the best-selling book about Clinton’s failed campaign written by Jonathan Allen and Amie Parnes, has been optioned for a limited series by TriStar Television, a division of Sony Pictures Television, and Davis Entertainment, TheWrap has learned,

The project has not been attached to a network yet. 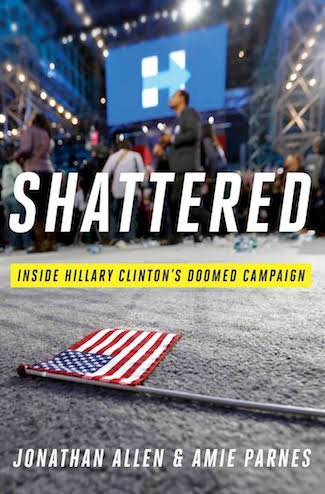 “Shattered,” which topped the combined print and e-book New York Times bestseller list last week, has been the talk of Washington since its release.

But the option may not come as welcomed news to Clinton or her campaign surrogates. Christina Reynolds, a deputy communications director for the Clinton campaign, expressed her dissatisfaction with the book’s account of the the Clinton campaign in a recent post on Medium.

The book’s paints a picture of a campaign bogged by infighting and dysfunction, just as Clinton is returning to public life.

No writers have been chosen for the project yet.

The TV deal for “Shattered” comes just two months after HBO announced it was adapting Mark Halperin and John Heilemann’s book about Trump’s 2016 presidential campaign, which will be published by Penguin Press.