After numerous leaks and paparazzi shots, the first official look at Zachary Levi in costume and Jack Dylan Grazer as Freddy Freeman from DC Comics movie “SHAZAM” has been released online. (See it below.)

“I wanted to keep the shorter cape as a throwback to the original because that’s something that sets him apart from Superman or Batman,” the director David Sandberg told Entertainment Weekly. “It makes him feel a bit more Golden Age superhero, which is the vibe I’m going for.” 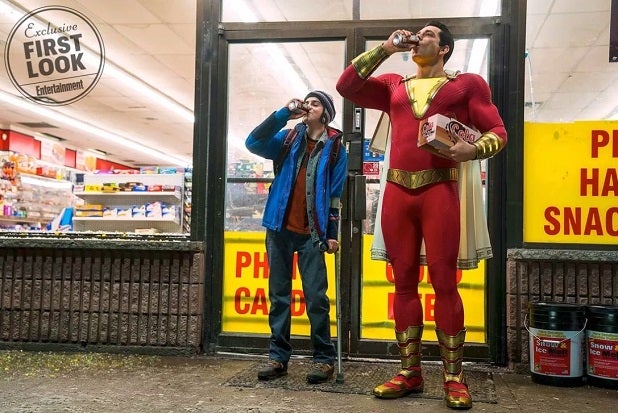 After photos surfaced in March of Levi in full costume on the set of “Shazam,” Men’s Health took a swipe at the actor, asking if he was wearing fake muscles under his costume. “The actor’s arms looked huge in recent set photos, but are they real?” they wrote. “We’re still not buying it.”

Yes, he’s getting help from costume padding (as most movie superheroes do), and, yes, Levi will fly into the DC Universe when “Shazam” hits theaters on April 5, 2019.

The first trailer for the movie will debut inside Hall H during San Diego Comic Con in mere days.