Los Angeles County Sheriff Alex Villanueva has fired yet another salvo in his battle with the media. On Tuesday, Villanueva announced his department is investigating Los Angeles Times reporter Alene Tchekmedyian for a “leak” involving a use-of-force video.

The sheriff insisted Tchekmedyian has some “important questions to answer.”

Villanueva made the comment during his weekly press briefing. He even went as far as displaying Tchekmedyian’s photo along with an image of her recent Times story about a claim that the sheriff was involved in covering up an incident in which a deputy reportedly kneeled on the head of a handcuffed inmate for 3 minutes.

Tchekmedyian wrote the story published Monday with the headline “Claim alleges Sheriff Villanueva directed cover-up of deputy kneeling on inmate.” The article said a whistleblower, specifically a sheriff’s commander, filed paperwork accusing Villanueva of obstructing justice. Villanueva claimed that he only became aware of the incident several months after it occurred. Commander Allen Castellano’s claim says Villanueva watched a video of the incident five days after it happened.

Tchekmedyian’s story states: “Villanueva said the deputy who kneeled on the inmate was relieved of duty in November, immediately after the sheriff learned of the incident. The claim says Johnson wasn’t relieved of duty until Dec. 7.”

The claim also stated that after viewing the video, Villanueva allegedly said to department employees, “We do not need bad media at this time,” and reportedly added that he would “handle the matter.” Villanueva is currently up for reelection. 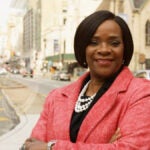 LA Times Executive Editor Kevin Merida issued a statement in response Villanueva’s comments singling out Tchekmedyian, writing that an “attack on Alene Tchekmedyian’s First Amendment rights for doing newsworthy reporting on a video that showed a deputy kneeling on a handcuffed inmate’s head is outrageous.”

“His attempt to criminalize news reporting goes against well-established constitutional law,” Merida’s statement continued. “We will vigorously defend Tchekmedyian’s and the Los Angeles Times’ rights in any proceeding or investigation brought by authorities.”

Tchekmedyian covers the sheriff’s department for the Times, and she began reporting on the incident revisited in the recent claim in March.

This is not the first time Villanueva has taken on the media. KPCC and LAist reporter Josie Huang, who called the sheriff out Tuesday on Twitter for his comments about Tchekmedyian, was tackled and arrested by deputies in 2020, while covering a protest. At the time, the sheriff accused her of “crossing the line from journalism to activism” by getting too close to deputies as they arrested a protester. Deputies arrested Huang, but the case was later dropped.

“Why is this LA Times reporter being investigated? She wrote about the attempted cover-up of a videotaped incident in which a deputy kneeled on the head of a handcuffed inmate for 3 minutes,” Huang wrote.