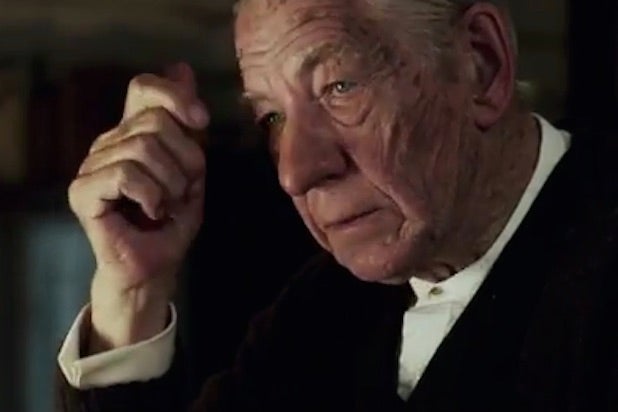 It’s elementary, Sir Arthur Conan Doyle’s estate said in a new lawsuit: It owns rights to the fictional detective’s days in retirement, and Mitch Cullin, author of the 2005 novel “A Slight Trick of the Mind,” and Miramax, which is producing the Ian McKellen film “Mr. Holmes” based on the novel, do not.

“There’s clearly a lot of creativity in the book — and we imagine the movie — beyond Arthur Conan Doyle’s protected material,” said Benjamin Allison, an attorney with Sutin Thayer & Browne, which represents the estate.

“We admire both the book and the movie — and we have told the defendants that,” Allison said. “But much of the setting, plot and especially the character and emotional makeup of Sherlock Holmes as an older man come straight from copyrighted stories. Those stories are among the most original and creative works of modern fiction, and they should not be ripped off just because older Conan Doyle stories are in the public domain.”

The estate is making an interesting argument. The first 50 of Conan Doyle’s Sherlock Holmes works are in the public domain — which is one reason for the recent proliferation of Sherlock-themed projects on TV.

However, the last 10 Holmes stories, published between 1923 and 1927, are still under U.S. copyright. “These copyrighted 10 stories develop the details of Holmes’ fictional retirement and change and develop the character of Holmes himself,” states the lawsuit, filed in the U.S. District Court in New Mexico on Thursday.

In the film, due for release in the U.K. June 19 and in the U.S. July 1 from Roadside Attractions, Ian McKellan stars as a retired Holmes who teams up with a young boy to investigate a 50-year-old cold case involving a beautiful woman from his past. Laura Linney co-stars in the project, adapted from Cullin’s novel by Jeffrey Hatcher.

The complaint for injunction and damages also names Cullin’s publisher, Penguin Random House, as well as Roadside Attractions and director William Condon as defendants. “The remaining defendants have participated in copying these protected stories in the infringing movie, have published and distributed the infringing novel and motion picture, and have titled the movie so as to confuse consumers and unfairly trade on [Conan Doyle Estate Ltd.]’s goodwill,” the lawsuit states.

The estate seeks recognition of the Conan Doyle source material and a share of the profits from the book and the film, Allison said, adding that whether an injunction to block the film is “up to them.”

TheWrap has not received comment from Miramax or Roadside Attractions.

The lawsuit notes two references to Holmes’ retirement in the public domain, but lists elements that only appeared in later stories that the estate claims Cullin appropriated. The suit cited parallels between the novel/film and “The Adventure of the Blanched Soldier,” a late story that utilized “the creative point of view of Holmes rather than Watson narrating a detective story — and the plot behind it: that Watson has remarried and moved out of Baker Street.”

It is my habit to sit with my back to the window and to place my visitors in the opposite chair, where the light falls full upon them. Mr. James M. Dodd seemed somewhat at a loss how to begin the interview. I did not attempt to help him, for his silence gave me more time for observation. I have found it wise to impress clients with a sense of power, and so I gave him some of my conclusions.

“From South Africa, sir, I perceive.”

“Yes, sir,” he answered, with some surprise.

The estate claims that in the novel, Cullin copies the seating placement and use of the window’s light, as well as the sequence relating the client’s resulting awkwardness, Holmes using the discomfort for observation, impressing his client with conclusions and noting the client’s surprised reaction.

As was my usual custom, I sat with my back to the window and invited my visitor into the opposite armchair, where — from his vantage point — I became obscured by the brightness of the outside light, and he — from mine — was illuminated with perfect clarity. Initially, Mr. Keller appeared uncomfortable in my presence, and he seemed at a loss for words. I made no effort to ease his discomfort, but used his awkward silence instead as an opportunity to observe him more closely. I believe that it is always to my advantage to give clients a sense of their own vulnerability, and so, having reached my conclusions regarding his visit, I was quick to instill such a feeling in him.

“There is a great deal of concern, I see, about your wife.”

“That is correct, sir,” he replied, visibly taken aback.