Yeah, that’s right — Hollywood has secret clubs. And it ain’t that new spot Drai’s at the W in Hollywood.
For these clubs, it’s not enough to know someone to get in. First you have to know they exist.
From hoops to poker to right-wing politics, they’re secretive in nature and selective in membership. And in an appropriate twist, TV super-spy (Zach Levi) belongs to two of them.
TheWrap went sleuthing to bring you the full reveal of Hollywood’s secret social scene:
• The Millionaires’ $2 Poker Game
Each Wednesday for the past 18 years, veteran music agent Norby Walters has welcomed nine boldface names to his Wilshire corridor high rise for three hours of poker.
The card club’s roster has been a generation-spanning grab bag of varying starpower: everyone from Sid Caesar and the late Milton Berle to Sharon Stone, Andrew Dice Clay and “Jeopardy” host Alex Trebek.
William Shatner has taken a seat at the table – as has Chris Pine, setting up a theoretical Capt. Kirk vs. Capt. 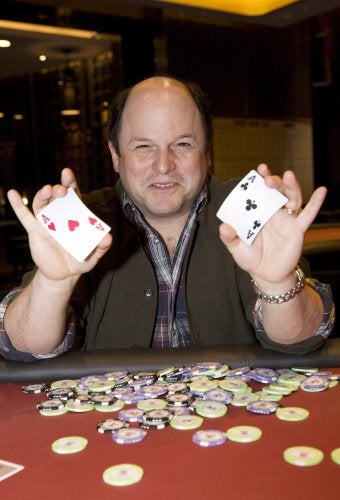 Kirk showdown.
And current regulars include actual poker champs from the industry community: World Series of Poker bracelet winner and actor Jennifer Tilly, and fellow World Series of Poker money winner Mimi Rogers.
Interestingly, all these penthouse millionaires compete for $1 and $2 hands.
With such low stakes, a regular player told TheWrap that “nobody wins and nobody really loses … except Jason Alexander.”
Reportedly, on his first visit years ago, Alexander lost every hand of the night, going down $200. He retorted, “Don’t worry, I’m doing a million-dollar pretzel commercial tomorrow.” (This was most likely his mid-‘90s Rold Gold Pretzel Super Bowl ads.)
Meanwhile, Alexander’s former “Seinfeld” boss Larry David reportedly earned a reputation for being an agonizingly slow caller, provoking competitors to ridicule his low stakes in light of his syndication nest egg.
• Kimmel’s Super Sundays
Every Sunday during football season, Jimmy Kimmel plays Willy Wonka to friends, staffers and fellow comics by opening up his house not just to gridiron viewing but to a fantasy of home-made culinary delights.
A theater-sized main screen flanked by plasmas and 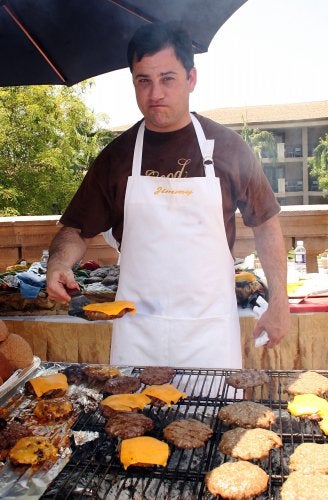 multiple TVs in the kitchen ensure that every game is “on” everywhere in the house. But that’s only part of the draw.
Food offerings have included a dessert carousel fridge straight out of a deli, brick-oven pizzas and Kimmel’s special chili.
One regular told The Wrap, “His pizzas are delicious, and his greedy guests sit and wait for them like pigeons waiting for crumbs in Washington Square Park.”
If all of the beer or Jimmy’s food sends guests to the bathroom, fear not — there are TVs in there, too.
“Adam Carolla is the resident alpha male while Jimmy labors away in the kitchen like professional house staff,” according to the regular. And during last year’s Super Bowl, Ben Affleck made his debut and fit in like a regular. (Those with a long pop-culture memory will remember that Affleck and Kimmel had a well-publicized faux-romance in a YouTube music video, a response to a video by Sarah Silverman and Matt Damon.)
But the biggest cameo in this “man-show” also provided one of the most bizarre moments in the party’s history.
Tom Cruise once showed up … with his mom.
• The Friends of Abe
It’s not easy being a Republican in Hollywood.
In a town painted “Democrat blue,” where can entertainment industry conservatives find an island of “red” for political refuge?
At social gatherings of the “Friends of Abe,” a network that subscribes to the same PR rules as “Fight Club.”
What we do know is that prominent participants have included Kelsey Grammer, Patricia Heaton and Zach Levi.
“Friends of Abe” is a play on euphemistic social code names from the past, like “Friends of Bill W.” (AA) and 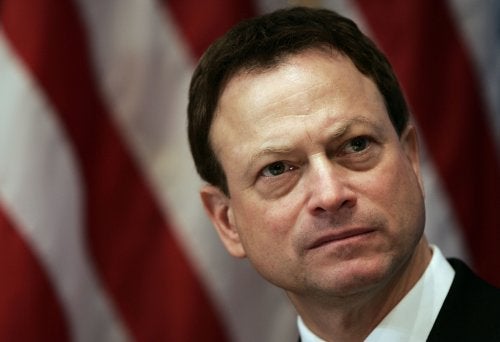 “Friends of Dorothy” (LGBT).
The group provides a “safe zone” for working actors, writers and others to speak openly, without “being punished professionally by the industry’s decision makers … like (Steven) Spielberg,” said one member who spoke on the condition of anonymity.
The boldface names have helped the group grow beyond its original weekly lunch meetings at the Sportsmen’s Lodge in Studio City four years ago. Nearly weekly lunches continue at other Valley restaurants and sometimes at members’ private homes.
Hidden behind a password-protected site, (www.friendsofabe.com) members are free to network amongst the like-minded, Facebook-style — posting their political views alongside headshot photos. Offline, they have reportedly held audiences with GOP stalwarts like Newt Gingrich.
It’s somewhat of an open secret that Gary Sinise is the group’s general.  However, a rep for “Lt. Dan” only confirms that he is “involved with many humanitarian causes but does not seek publicity for the time or resources that he provides to many different organizations.”
• Hollywood’s Hardwood Varsity
Every winter between New Year’s and Easter, 205 hand-picked talents like Joel McHale, Taye Diggs and Michael Clarke Duncan play a full season of organized basketball in a (formerly) secret westside location on Sunday afternoons.
“Formerly secret,” that is, until league rookie Frankie Delgado spilled the beans on Twitter recently: Crossroads School Gym. 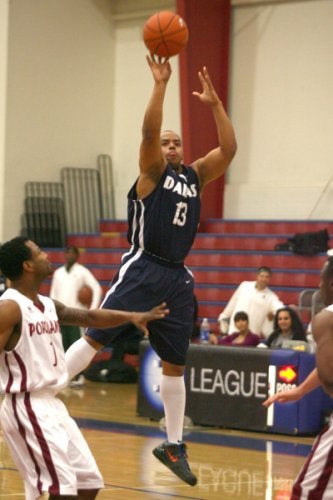 Founded by the NBA 12 years ago to establish a working relationship with the entertainment community, longtime NBA entertainment execs Shane Duffy and Felisa Israel took the “E League” private in 2008.
Perennial NBA sponsors Nike and Gatorade help finance the league, providing customized jerseys and sneakers. Actual referees, scoreboards, a halftime dance team of kids and a playoff system create a surprisingly competitive arena.
The secrecy of the league lies in its strict media blackout, empty stands, and “family-only” spectator policy. Until Delgado revealed the location, paparazzi had never been a problem.
The league’s alumni like it that way. They include Will Ferrell, Justin Timberlake, and Adam Sandler. Laker alum Rick Fox continues to hoop it up with Avatar’s Joel David Moore and multi- secret-clubber, Zach Levi. (At left, Donald Faison shoots over boxing champ Sugar Shane Mosley. Courtesy of Adam Davis.)
The NBA’s Shane Duffy, who helped take the league private, acts as the commissioner, slotting players on to teams to ensure competitive parity after he auditions some of the players himself. He’s been accused of “throwing elbows” during the pick-up games to test the thickness of some actors’ skin, and ensure parity across the teams. Veteran players include “Superman” Dean Cain and agent Peter Micelli (11 seasons each).
Jerry Bruckheimer used to run a rival winter sports league, now defunct — the “Bad Boys Hockey Tournament,” named after the 1995 film. David E. Kelley, Cuba Gooding Jr. and Scott Wolf would lace up the skates for organized ice time that culminated each year with a championship weekend in Vegas featuring current NHL players.
• Kutcher’s ‘Amazing Races’
Until recently, Twitter King Ashton Kutcher spent weekends with celebrity pals competing in a private, not-for-air reality show: a made-to-order edition of “The Amazing Race.”
Along with his production partner in Katalyst Films, Jason Goldberg (“Punk’d,” “True Beauty”), Kutcher recruited wife Demi Moore and friends like Balthazar Getty, Rebecca Gayheart, Eric Dane and Jason Bateman for full-day races, with clues leading them to challenges and puzzles all across the L.A. area.
A local team of producers called L.A.R.F. planned, prepped and executed Kutcher’s version of the CBS hit.
One race had Kutcher’s crew chasing clues relating to “Hollywood Scandals,” delivered by the actual V.O. announcer from E!’s “True Hollywood Stories” franchise. Pit stops included the hair salon where Britney Spears infamously shaved her head and the corner where Eddie Murphy allegedly offered a trans-sexual a ride years ago.
And in a marketing stunt for HP and mobile video-sharing service Qik, Kutcher and Digg.com co-founder Kevin Rose produced a race called “24 Hours at Sundance” in 2009.
While that was Katalyst’s last stand L.A.R.F. continues the tradition. It now makes a full-time business out of knocking-off the “Amazing Race” for industry clients with a secret sweet-tooth for reality, with budgets starting at $10,000.
One client, TV exec-producer Marco Pennette (“Desperate Housewives,”/ “Ugly Betty”), commissioned a race for a recent birthday based solely on the songs of Stephen Sondheim. Actual Tony Award winners handed out the clues along the way.