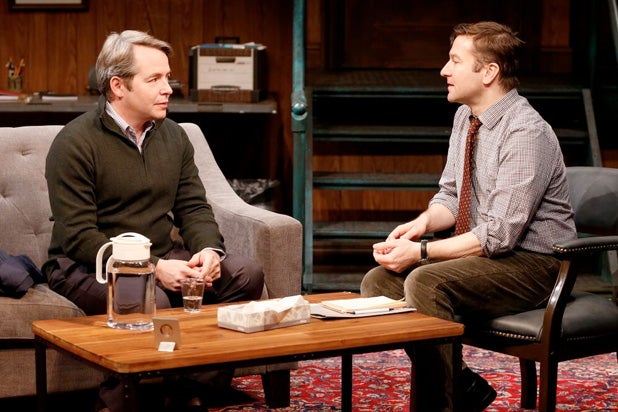 Ever since his Tony-nominated turn in “The Producers,” Matthew Broderick has become one of the most mannered and understated-to-a-fault performers on the New York stage. He continues his recessive approach to acting in an uneven new revival of Conor McPherson’s “Shining City,” which opened Thursday at Off Broadway’s Irish Repertory Theatre.

In some ways, Broderick’s somnambulism suits his character, John, a middle-aged businessman who has become so distraught about the death of his wife in a car accident that he has begun seeing her ghost around the house — forcing him to flee to a bed and breakfast.

He also flees to the shabby office of newbie therapist named Ian (the talented Billy ), an ex-priest who’s deeply conflicted about his faith, about his commitment to the girlfriend (Lisa Dwan, sadly too shrill) with whom he has a child, and about what he wants from a virtual stranger he meets on the street (James Russell, oozing awkward discomfort).

“Shining City” is one of McPherson’s finest plays but also one of his trickiest, requiring its actors to maintain a delicate balance between anguish and rage, often in dialogue that can be halting and fragmented one moment and highly articulate and poetic the next.

Oliver Platt (as John) and Brian F. O’Byrne (as Ian) achieved just that balance in a memorable Broadway production a decade ago.

is strong as Ian, who harbors deep-seated doubts about his faith and his relationship and yet still manages to find a way to provide therapeutic care to others. He fairly embodies his own description of his patients: “People who might just feel a little bit… stuck, you know? And maybe they… just need a… just another point of view on what’s going on.”

But under Ciaran O’Reilly’s direction, tends to overdo the anger, as does Dwan as his girlfriend. And Broderick, in recounting an incident in which he nearly throttled his late wife and provoked a beat-down during an unfortunate visit to a brothel, seems more enervated than enraged. He gives no hint that his character is capable of raising his pulse, much less his fist.

Still, there is much to admire about this production at the newly renovated Irish Rep, from the appropriate temporaryness of Charlie Corcoran’s scenic design to Michael Gottlieb‘s spooky lighting.

And McPherson’s dialogue remains as crisp and well-crafted and thought-provoking, teasing connections between scenes and characters that feel both natural and inevitable. And then there’s his shocker of an ending — which still has the power to spike the hairs on the back of your neck.