When we finally see Kirby’s (Elisabeth Moss) brutal attack at the hands of Harper (Jamie Bell) in the next-to-last episode of “Shining Girls,” it’s shocking, but also, far less graphic than we might have expected.

Moss, who has directed five episodes of “The Handmaid’s Tale,” went behind the camera to helm the fifth and seventh installments of the AppleTV+ series. (Michelle McLaren directed the first two episodes and Daina Reid helmed the rest.)

The actress, who also executive produced the sci-fi series, tells TheWrap she deliberately chose to show the attack from Kirby’s point of view, which means we never see Harper or the knife. One moment Kirby, then still known as Sharon, is happily walking her dog on the beach at night, still beaming from the news that she’s getting her first solo byline. Then, out of nowhere, she’s on her face in the sand. We see the assault play out in bursts as she seemingly loses consciousness. 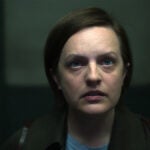 TheWrap: Was that your decision to not actually show Kirby being stabbed?

Yeah, it was very much very much my decision. It was really important to me. Two things were very important to [showrunner] Silka [Luisa] and me. One was how we were going to approach the violence on the show. We really wanted to toe the line between realistic, honest and truthful and not [be] gratuitous.

You have to be honest about what this experience is like for this woman. And you have to be honest about the trauma that she would experience from that attack. But at the same time, you don’t want to be gratuitous. We just weren’t interested in that for this show. The other thing that was important to me was to show it very much from Kirby’s point of view and to really be with her in the attack, to hear the attack the way that she would have heard it, to not see him because she says she doesn’t see him.

It’s so shocking, it comes out of nowhere, and she doesn’t know what’s happening. And you’re right there with her. I thought it worked really well.

Thank you. Yeah, she didn’t see the stab happen. He pushes her face to the side. So she doesn’t see it. So I didn’t want the audience to see it. 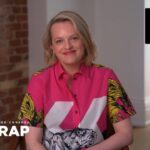 Was Jamie Bell actually in the scene?

I did a wide shot of Harper on top of Kirby, but it wasn’t in my cut, because I just wanted it to be all her. And then we decided to jump cut through it.

Exactly. Which is true with traumatic experiences.

How challenging was it to direct yourself being assaulted?

I’ve never shot my own attack before. [Kirby] talks about the attack the whole season. So Silka and I had to make sure that we were including all of the elements that she has been referring to all year, like the person that walks by and she’s walking the dog. And it rained that night, so that was really hard.

You also filmed Harper killing Dan (Wagner Moura) in Episode 7, which is much more violent.

It’s easier to shoot when you’re not acting in something. That fight, the murder scene, it felt like this incredibly large, operatic sequence and I just I loved it. I loved shooting that. We had this incredible location, that building, that old theater was so amazing, and so cinematic.

And then after killing Dan, a bloodied Harper walks by Dan’s son in the car. That was such an eerie moment.

I know. Oh my God. And Jamie. I mean, I loved working with those men. Jamie and Wag are so good. And directing them was such a pleasure. I loved Episode 5 because I got to work with Jamie a lot, which was so fun for me and he’s just such an incredible actor.  But yes, Jamie was so amazing in that scene with that kid. He just hit the perfect note,  like the perfect note of creepy, but [also] charming and it’s just… he’s incredible. 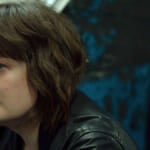