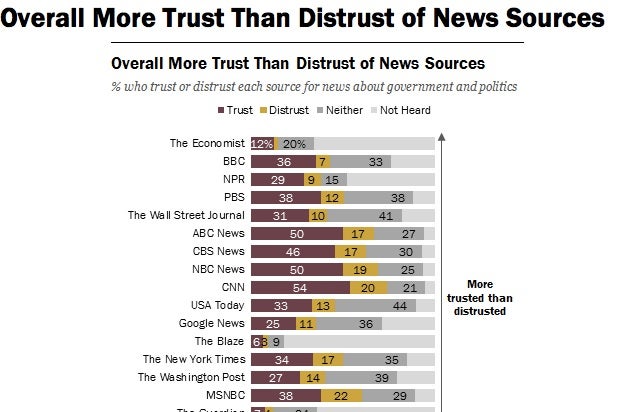 A Pew Research Center study released Tuesday shows a stark difference in media consumption when it comes to liberals and conservatives.

The study, which was conducted from the end of March through April 29th and spoke to 2,901 web respondents, concluded liberals tend to get their information mostly from CNN, MSNBC, National Public Radio, and The New York Times; none significantly more than the other. In contrast, conservatives favor Fox News Channel. For the respondents categorized as mostly conservative, 47% cited Fox News as their main source for news on government and politics.

Outside of Fox, conservatives cited the Wall Street Journal, Breitbart, the Drudge Report, The Blaze, and radio shows hosted by Glenn Beck, Sean Hannity, and Rush Limbaugh as outlets they depend on. Overall, conservatives said they distrusted two-thirds of the news sources they were asked about.

Liberals trusted 28 of the 36 sources they were given: 15 percent favored CNN, 13 percent chose NPR, 12 percent identified with MSNBC, and 10 percent with The New York Times. On the cable news end, CNN topping MSNBC among liberals is an interesting development as MSNBC has the most amount of liberal hosts and contributors across cable news and identifies itself as a progressive network.

Among all ideological groups, the most trusted outlets were The Wall Street Journal, The Economist, BBC, NPR, and Google News. On the dubious side, BuzzFeed ranked as the least trusted outlet, followed by The Rush Limbaugh Show, The Glenn Beck Program, The Ed Schultz Show, and Al Jazeera America.