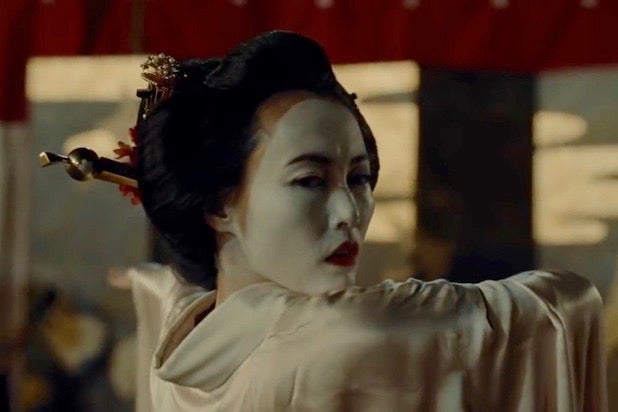 (Spoiler alert: Please do not read ahead unless you’ve seen Sunday’s episode of “Westworld” Season 2, “Akane No Mai.”)

“Westworld” fans finally saw Shogun World on Sunday’s episode, “Akane No Mai.” And while opinions are sure to differ about how historic Japanese customs and the Samurai way of life were worked into Lisa Joy and Jonathan Nolan’s hit HBO series, guest star Rinko Kikuchi told TheWrap she does not believe culture appropriation was an issue for Shogun World.

And the Japanese actress should know, as she practically ran the joint. Or, at least, its most popular Geisha house.

Tonight’s long-awaited dive into Delos Destinations’ Samurai-centric location came with a packed plot that began with a robbery that’s almost a shot-for-shot remake of the Mariposa Saloon heist from Season 1, and ended with geisha host Akane (Kikuchi) and Maeve (Thandie Newton) joining forces in a large-scale fight for their lives against the Shogun’s android army.

Through all of that, the Oscar-nominee didn’t see anything that rubbed her the wrong way?

“Of course there were small things,” Kikuchi told TheWrap via interpreter Lena-Grace Suda during a phone interview. “For example, [Kikuchi] felt like, ‘You wouldn’t necessarily wear a wig in this way.’ But those are really just minor things. On the general scale, [Kikuchi] felt as though the creative team had a lot of respect toward Japan, actually. And making a Samurai set, even in Japan, is very difficult nowadays, because it just takes a lot of money. A very high budget. So [Kikuchi] actually feels very honored that she was able to play out a scene like this, such an elaborate scene in ‘Westworld.’ “

On the other hand, Kikuchi wonders if cultural appropriation in Shogun World even has to be part of the conversation because it’s not based on anything real.

“The fact that a lot of people even think of cultural appropriation, [Kikuchi] thinks that in and of itself is a really brilliant thing because the show gets people thinking and talking,” Suda said. “For example, there are other themes, like, ‘What’s really real and what’s not real in this world we live in?’ and the relationship that exists between humans and AI. So she thinks the fact that people think about topics like cultural appropriation is a testament to how good the show is.”

Newton told TheWrap that handling the cultural aspects carefully was of “great importance” to the showrunners.

“I think they really wanted to spend the time and effort getting it right, so they had experts come in, Japanese consultants. The actors, they flew in from Japan,” Newton said. “They were all so keen to make this slice of television as authentic as possible as a Kurosawa-esque homage. So great detail and attention was paid.”

“The lead players in ‘Westworld’ don’t come with ego, don’t come with that kind of baggage,” Newton added. “We’re all just desperate to make it as good as it can be in the relatively short space of time that we’ve got to do it. This one episode is just three weeks’ of work. That’s unheard of to get an hour’s work [on screen]. It looks beautiful. It doesn’t have the kind of budget say, ‘Game of Thrones’ has. And so much of what makes it as good as it is is the hard work and expertise of the crew and the cast.”

Newton adds that she doesn’t think the show was appropriating the culture so much as trying to shine a light on that culture.

“‘Westworld’ can do that because the whole point of that theme park is it’s harking back to times and entertainment that people have loved,” Newton said. “So, obviously, when you’re looking at Kurosawa and traditional Japan, it’s the fusion of traditional Japan and also Kurosawa that would be where ‘Westworld’ takes it’s inspiration. I think those two things combined. We did a really really good job, and I guess it’s up for the audience to decide.”