In Wednesday morning’s roundup of the Animated Short nominees, I called the French film “Logorama” “the freshest and most audacious” of the nominees. The film is a brazen, foul-mouthed crime story set in a world where corporate logos and mascots run amok: the good guys are Michelin Men, the psychotic criminal Ronald McDonald.

“Logorama” was directed by Ludovic Houplain, Herve de Crecy and Francois Alaux for the collective H5, which has also created advertising campaigns and acclaimed videos for the likes of Massive Attack and Royksopp. Via email, Houplain and de Crecy answered a few questions about an unhinged, raunchy film that is one of the oddest and wildest entries in this year’s Oscar race.

How did you hit upon the idea of creating a world populated exclusively by corporate logos and mascots?
DE CRECY: It was a long time ago, beginning of the 21st century. The project took various forms before we wrote the particular story of “Logorama.” We almost made a tribute music video for George Harrison with this idea (around 2002), before our producers asked us to create fake logotypes instead of existing ones… that was impossible to us, we put the project on hold… until, years after, we met Nicolas Schmerkin, famous producer of shorts in France, who believed in the project.

HOUPLAIN: We started the production in 2006. We succeeded in putting together a production team who agreed on the signification, meaning not censoring ourselves in terms of the brands we chose or the icons and logos we were going to use. We had to take the idea to its logical conclusion without fear of the possible reaction. From there the project became about creating a real picture of modern and contemporary society through two of its most powerful visual elements: logos and visual medias. The film is based on the same concept as Pop Art.

Do you look at the film as a criticism of corporate branding, a tribute, or both?
HOUPLAIN: Through our professional experiments we realized that censorship was everywhere, whether it be in the advertising or musical world (through channels like MTV for example, who have a checkup on every music video made). Having come up against so many barriers along the way we decided to develop the concept into a short film because it was the only way to avoid censorship. As our lawyers (three in total) told us, it was a mistake, and they all tried to prevent us from doing it.

That only made us want to develop the concept even more. And whether it was Hervé or I, and then the co-producers (Addict films, Autour de Minuit, H5 through Nicolas Rozier), everybody got behind the film and pushed us to remain true to the idea. So, in answer to your question, the film is not merely a critique of brands or an anti-capitalist statement, it also highlights the importance of fighting for complete freedom in the creative process.

In the modern world, where everything adheres to rules, and obeys laws about intellectual property (copyright, trademarks etc.), let’s at least keep this freedom, the freedom of speech, that should be above all the laws. It should be one of the Human Rights. How can a brand hypothetically forbid or attack this film? I think it would be crazy. So, yes, in that respect, the film is subversive. To be honest, I do find it strange that this kind of film hasn’t been made before though.

However, and this is really important, the film is also a tribute to the logos, but not to brands. H5 has a long and established place within the graphic design community. We were immersed in the world of visual identity since the beginning of H5 with references such as Paul Rand, Les Designers Republic or Raymond Loewy. We understand the thought processes and creative effort that goes in to designing these powerful visual images and we always tried to apply these principles to the music world when we started to work with artists and musicians that came be known as the French Touch movement.

DE CRECY: There’s no critic of the world as it is in “Logorama,” it’s just a statement. I hope “Logorama” tells something that people feel without being able to express it. Which is, to me: in societies that thought they freed themselves with the power of religions or dictatorships, people don’t realize they’re facing another reality behind the smiling icons they see everyday.

The idea behind was to show that communication is a powerful tool. You can make oil and have a green and yellow flower logo. When you see the logo, you feel good, you feel like you’re in a flowers field in summertime.  That’s no more and no less the kind of magic trick that we used in “Logorama,” but this time not to tell a happy and smiling story.

We took also a certain pleasure fighting against the self censorship about brands, which became almost a way of thinking. Self censorship is also a condition for working in certain domains – like advertising. How can you criticize the one who feeds you? We played with logotypes that are part of our visual environment since we were born. We took these logos as a universal cultural inheritance. The film is a way to regain this common patrimony. And of course it is a tribute to the great artists that designed these wonderful logotypes.

Do you intend to make connections between the characters and the roles they play in the film? For instance, why Ronald McDonald as the chief bad guy?
DE CRECY: Because the clowns are ALWAYS the bad guys. Bank robbers, the Joker, always the one that scares you behind his smiling mask.

HOUPLAIN: We didn’t start with any pre-conceived idea, like thinking that McDonald’s would be the bad guy. We started by conceiving and then writing the film like a normal story, with very caricatured roles. There were supposed to be cops, a psychopath, a waitress, a diner in the centre of the film where everybody would meet. 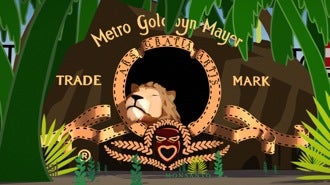 Then, when our story was ready (after many editing sessions with Sam Danesi), we started the casting process. But instead of choosing between George Clooney and John Malkovich, we took other stars: Ronald Mc Donald, Haribo and Miss Esso.

It’s the characters’ mood/concept that defined the way the roles were distributed. Of course, it was difficult to rival Ronald in the role of the psycho. The thing with the clown is that it immediately works for the role of the crazy person (you just have to see Joker in Batman). It’s a cliché, but the whole direction of this film is a cliché, as is the representation of LA.

Once the roles were defined, we did make crazy connections between them like Ronald using a rifle of the Fractions Armé Rouge, the German terrorist group. Miss Esso smoking an Air France cigarette while all the airlines have banned smoking in the bathroom. The whole film is filled with logo associations, playing on the opposition of signification, and the competition between brands. It’s really very playful. We allowed ourselves everything that was forbidden on TV or in films or advertising. Everything was allowed. There were no limits.

Have any of the companies whose logos are depicted in the film complained?
DE CRECY: None of them complained for being in the film. The only complaints came for the ones who weren’t in the film! Like Nokia for example…  We also had some congratulations from brands depicted in the film. Like Cash converters, who said they were really happy to be placed in the heart of the city, and that it was fitting to their new marketing plans!