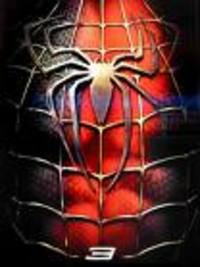 LAS VEGAS — Your intrepid correspondent sends greetings from ShoWest, the annual convention for theater-owners and managers from all across the country. Here’s all you get of Spider-man 3 at ShoWest  (see left). A nice big image, liberally posted around the Paris Hotel, with no hint at all of what this movie will be like. The upcoming summer, however, seems poised to be filled with blockbusters (nearly all sequels), from "Shrek the Third," to the Pirates of the Caribbean, to the next Fantastic Four and a new installment in the Bourne Identity series.

Paramount showed a few minutes from its upcoming Michael Bay extravaganza, "Transformers," a monstrous version of those itty-bitty toys that little boys love to put together.

The sections showed to exhibitors had an unusual tone: Bay’s attempts at humor, mixed with his specialty, which is explosive action sequences, heavy on the special effects, and seriously influenced by "War of the Worlds," by the look of it He got a few laughs, and applause when the lights came up.