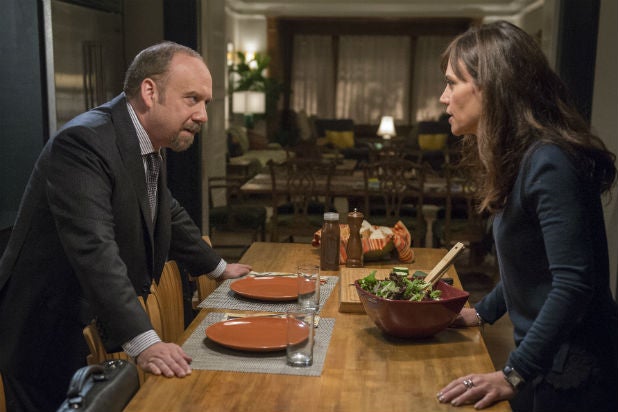 UPDATED, Jan. 7, 10:15 a.m.: In a statement to TheWrap, a Showtime spokesperson said, “Ms. Shull has cycled through multiple law firms and theories of her supposed case, as part of her repeated failed attempts to force us to engage her as a consultant on our show. We are confident her lawsuit will similarly fail.”

Showtime Networks and the creators of the series “Billions” were sued Monday by Denise Shull, an author and Wall Street performance coach who says that the Wendy Rhoades character from the series is a rip-off of her work.

In her suit, filed in federal court in New York, Denise Shull, described in the suit as “an expert in neuroeconomics, modern psychoanalysis and neuropsychoanalysis,” says that the Rhoades character, portrayed by Maggie Siff, infringes on her 2012 book “Market Mind Games.” According to the complaint, in the book, Shull “created a fictionalized retelling of her experiences and observations in the form of an in-house female performance coach for a hedge fund.”

“Defendants promote themselves as the creators, writers, and producers of the television series ‘Billions,’ which includes the pivotal character of Dr. Wendy Rhoades, a female, in-house performance coach for a hedge fund. Dr. Rhoades is known for her unique technique, as expressed in multiple episodes of the series, which combines the psychology of trading and risk, based largely on recognizing and using emotions as part of the risk calculus,” the suit reads. “Dr. Rhoades’ technique is not a fiction created out of the minds of the showrunners and writers of ‘Billions.’ Rather, it is an unauthorized rip-off of Plaintiff Ms. Shull’s original work, the book ‘Market Mind Games: A Radical Psychology of Investing, Trading, and Risk.'”

According to the suit, Andrew Ross Sorkin, one of the creators of “Billions” who is also named as a defendant in the suit, invited Shull on his show “Squawk Box” in 2012, and they discussed her book. Later, the suit says, Sorkin requested Shull’s assistance with the Rhoades character.

“On or about August 26, 2015, Defendant Sorkin emailed Ms. Shull about the series ‘Billions’ and requested her assistance with the development of the female lead character, Dr. Wendy Rhoades, a female hedge fund performance coach who helps financial professionals improve their performance by dealing with their own emotional baggage,” the suit reads. “The following day, August 27, 2015, Defendant Sorkin sent to Maggie Siff an email introducing Ms. Shull as ‘one of the leading hedge fund performance coaches in the country.’ Ms. Siff was cast to play the role of Dr. Wendy Rhoades in ‘Billions.'”

A spokesperson for Showtime declined comment on the suit, which seeks unspecified damages.