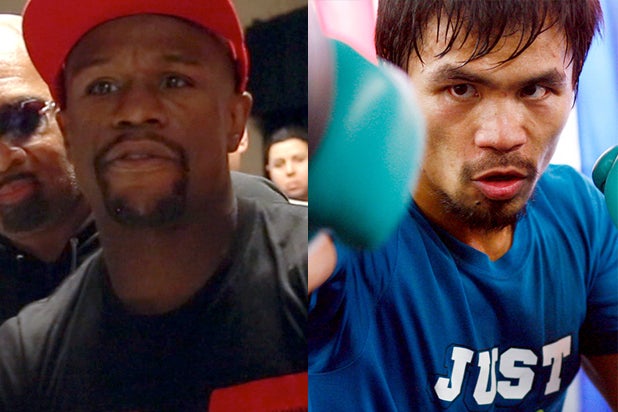 HBO and Showtime are teaming up so that Floyd Mayweather Jr. and Manny Pacquiao, two of this generation’s most iconic boxers, can finally face off in the ring in a pay-per-view televised May bout.

Also Read: 17 of the Most Dramatic Sports Movie Moments: From ‘Rocky’ to ‘McFarland, USA’ (Photos)

The networks are working together because the fighters have exclusive contracts for separate channels, with Mayweather locked into a six-fight Showtime deal and Pacquiao tethered to HBO. It’s not an unprecedented union between the rivals, as HBO and Showtime previously joined forces in 2002 for a bout between heavyweights Lennox Lewis and Mike Tyson.

The fight will take place on May 2 at the MGM Grand in Las Vegas. According to various media reports, the PPV event could cost $89.95 to purchase, with another $10 added for HD.

“All of us are thrilled to be able to deliver this event to boxing fans around the world. Now, for the second time under his current deal with Showtime Networks, Floyd Mayweather has agreed to fight an opponent that many people thought he’d never face,” Stephen Espinoza, executive vice president and general manager for Showtime Sports, said in a statement obtained by TheWrap. “We set an all-time pay-per-view record with the first event back in September 2013, and we look forward to another record-breaking performance.”

Signed, sealed, delivered. Mayweather vs. Pacquiao is ON May 2. https://t.co/82rzagO8XM

“Manny Pacquiao and Floyd Mayweather have been the two most prominent fighters in the sport of boxing for the past decade, and fight fans around the world have been clamoring for them to face each other. And now, on May 2nd, in what everyone believes will be the biggest boxing event of all-time, fight fans have been granted their wish,” HBO Sports President Ken Hershman added. “[It] will be a signature moment for the sport of boxing and HBO Sports is thrilled to be a part of this spectacular event.”