Premiering Thursday, June 10, at 10:30 p.m. ET/PT, the half-hour "The Green Room With Paul Provenza" puts the comedian-actor together with his fellow comedians in a round-table setting before a studio audience. 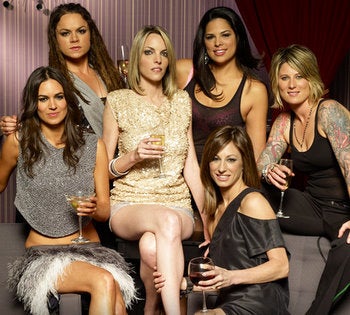 Starting Sunday, June 20, at 10 p.m. is "The Real L Word" (left), a reality show "inspired" by Showtime’s long-running "The L Word." It follows a group of lesbians at work and play in Los Angeles.

Dark comedy "The Big C," starring Laura Linney, debuts Monday, Aug. 16, at 10:30 p.m. Linney plays a reserved, suburban wife, mother and teacher whose terminal cancer diagnosis forces her to shake up her life and find the light side of a dark situation. Oliver Platt plays her husband, and Oscar nominee Gabourey Sidibe has a recurring role as her precocious student.

As for season finales, "Nurse Jackie" will wrap its second season on June 7 at 10 p.m., followed at 10:30 p.m. by the second-season finale of "United States of Tara."