Its debut a week ago sent DreamWorks Animation stock tumbling, but the second-week performance of "Shrek Forever After" was strong enough to win a weak overall box office that was down 14 percent from the four-day Memorial Day weekend last year, according to studio estimates. 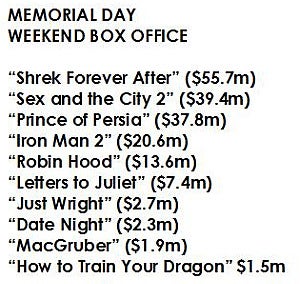 The fourth "Shrek" grossed an estimated $55.7 million, besting the premiere of Warner/New Line’s "Sex and the City 2," which brought in $39.5 million over the same four-day period.

The HBO-spawned sequel premiered strongly on Thursday, with a core female fan base driving $14.2 million of business. However, those figures don’t count into the Memorial Day box-office stats.

Overall, "Sex 2" has grossed an estimated $53.7 million over its first five days, which was below pre-release projections of $60 million. The film costs about $80 million to produce

Meanwhile, Disney’s Jerry Bruckheimer epic "Prince of Persia: The Sands of Time" finished third with $37.8 million. That would seem to make profitability tough for a film with a reported price tag of over $200 million.

However, following a soft $18 million debut in 14 foreign territories last weekend, "Prince of Persia" grossed $67 million in 47 international markets this time around, while debuting No. 1 in Russia, China, India, France, Korea and Mexico.

"Even in the U.K., where we were off to a slow start, we were up 20 percent," noted Chuck Viane," president of theatrical distribution for Disney.

With $133.3 million in global gross so far, Viane hopes the film — which attempts to cast Jake Gyllenhaal as an action star and received a B CinemaScore grade — can hold strongly next weekend.

"I look forward to the fact that 40 percent of kids are out of school Tuesday," he said.

Certainly, no movie has benefited from the availability of kiddie audiences like the 3D "Shrek Forever After," which saw its three-day weekend performance decline a respectable 39 percent from its premiere.

Of course, the performance lagged 56 percent from the week-two bounty of "Shrek the Third" in 2007. But with several more weeks to dominate the family market — and 3D screens — until Disney’s "Toy Story 3" arrives, "Forever After" is finding a niche.

"This was a terrific play time for the movie. We knew family audiences would be available," noted Anne Globe, head of marketing for DreamWorks.

Among other notable highlights this weekend, Disney’s 3D "Alice in Wonderland" crept over the $1.06 billion mark, surpassing Warner’s "The Dark Knight" as the No. 5 grossing movie worldwide of all time.