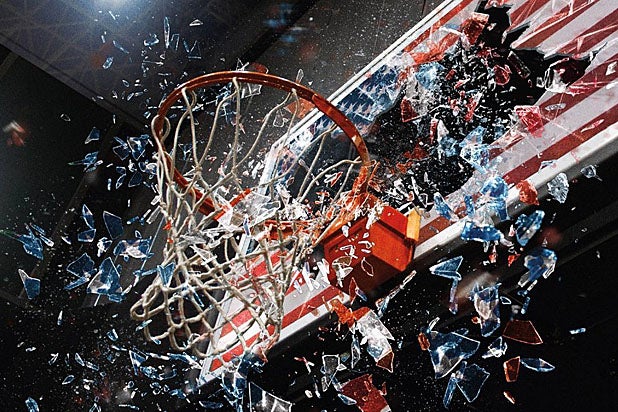 The title for Showtime documentary series “Shut Up and Dribble” was inspired by LeBron James’ feud with Fox News host Laura Ingraham last February, but the project had been in the works long before that.

“I don’t believe in coincidences … that it took two years to make and got released now after the world has become increasingly politicized is very synchronistic,” director Gotham Chopra told TheWrap. “When we first started, it was going to be equal parts social impact and cultural impact — and there was going to be more basketball in it — but this just felt like a natural evolution of the project and the conversation.”

James clearly didn’t heed Ingraham’s advice to “keep the political comments” to himself and instead used her words against her on the three-part series that he executive produced along with Maverick Carter and Chopra. Former ESPN anchor Jemele Hill, who has also had her own high-profile clashes with President Trump, narrated the program.

“Shut Up and Dribble’s” airing also coincided with the launch of two other Chopra projects — Season 3 of “Religion of Sports” and the debut of the podcast series “Why Sports Matter,” both for which he re-teamed with Tom Brady and Michael Strahan.

“The mission behind the company has always been that sports is a backdrop for great and relevant storytelling,” he said.

TheWrap caught up with Chopra to talk about all three series.

TheWrap: How has the concept of “Shut Up and Dribble” changed since you began working on it two years ago?
Gotham Chopra: Back then, everyone wanted to talk about the anthem issue. While we were focusing on the NBA, a lot of people I was talking to said, “What happened to Colin Kaepernick? This isn’t the first time this has happened. This happened in the NBA 25 years ago.” Now the show has come out, it is certainly topical but sports and politics have been colliding for decades.

Do you think the NBA is the most politically vocal of the leagues?
Football has always been called America’s game but the NBA is the most politically-relevant sport and its athletes are among the most outspoken. If you look across time, which this series does, to the ’50s and ’60s, to players like Bill Russell, Oscar Robertson and Kareem Abdul-Jabbar — they were in some ways civil rights activists of their era. What they were doing then was pretty radical and definitely set the foundation for what the NBA is today. LeBron is arguably the best player of his generation and he is also the most outspoken athlete out there now.

How did Ingraham’s “shut up and dribble” slam influence the series and the title?
We had a working title and thought we’d figure it out later. The project was already well underway and the movement for it being more socially anchored around politics was already happening, but the pivotal moment with the Laura Ingraham comments crystalized it for us and it became much more of an organizing principle. In some ways, the moment made us realize, “Oh, this is about politics.” It gave us a great title but also helped us refine the vision and the focus of the series.

Have you had any reaction from Laura Ingraham on it?
I have not heard from her. I was wondering if we were going to get anything from her or our president.

Why was Jemele Hill the perfect choice for narrator?
She has grown up in Detroit, knows her basketball, is an analyst and has been around these athletes for a long time. Jemele is not only African-American and can speak to that experience but she has also been part of this conversation. The president and the White House came after her on social media — not unlike LeBron or Steph Curry — so she has that unique perspective. She just really embraced and embodied everything we were looking for.

Were you always interested in politics or has that intensified over the last few years?
It has long been a passion of mine, probably with the same intensity as sports is. President Obama being elected, as a minority and a child of immigrants to become president, was a big affirmation of my journey and my experiences as a minority [Gotham is the son of Indian-born spiritual guru Deepak Chopra]. That helped intensify my interest politics, and certainly the last two years have ratcheted my engagement. It demands participation and you can’t just be passive. I didn’t want to make the series partisan but I did want to make it part of the conversation. It wasn’t about: “Here’s my point of view” — rather than about looking at the history that you may not know. The president and Laura Ingraham gave us hooks and topical moments but it is certainly not about them.

You also launched a podcast series this month. Why was now a good time for you to break into that realm?
I am a big podcast consumer. I love it because it’s a very different kind of storytelling. In film, the cinematography communicates so much of the story, whereas in podcasting, you have to really cement your storytelling and communicate it through sound. One of the things that happens when you’re doing a documentary television series is the question of “can this story fill up an hour?” We get pitched a lot of stuff that would make great podcasts as they can be less formatted — they can be 15 minutes or 50 minutes, whatever — so we just started experimenting with it.”Why Sports Matter” has always been the DNA of “Religion of Sports,” as we want to tell stories that have meaning and purpose so to bring that into podcasting and let that it be the foundation for the series felt inevitable.

How have the podcasts differed from the original “Religion of Sports” series?
I feel like you can play with topics more without having to invest a huge budget like you would for the show. We have an episode on the Humboldt bus crash tragedy in Canada last year where many of the players and coaches perished that we considered trying to do as a documentary, but mobilizing that and trying to figure out all the different pieces and the rights’ issues was complicated. With podcasting, we can literally just start talking to people and recording.

Season 3 of “Religion of Sports” premieres Wednesday at 8 p.m. on AT&T’s AUDIENCE Network.