This story originally appeared in “The Look” section of the Nominations/SAG/Golden Globes issue of TheWrap’s magazine.

One reason is that both loathe the idea of multiple-camera cinema. “Producers say, ‘Let’s get 10 cameras on it and something’s bound to happen,’ but it doesn’t work,” said Deakins. “Coming from documentaries, I like to put the audience in the main character’s point of view.”

Or, as Villeneuve puts it, “There’s one angle that’s perfect — Deakins perfect.”

Lots of great filmmakers can tell you about “Deakins perfect.” The 66-year-old Brit is celebrated for shooting some of the best films by Martin Scorsese, Sam Mendes and the Coen brothers, and he’s won three American Society of Cinematographers awards (plus their Lifetime Achievement Award).

He’s unquestionably the greatest living cinematographer not to win an Oscar, but he’s all about telling the story at hand, not using film as a canvas for self-expression.

For “Sicario’s” style touchstone, Villeneuve had Akira Kurosawa in mind, but Deakins was thinking of the ’60s French filmmaker Jean-Pierre Melville. “The idea of [Kurosawa’s] ‘Seven Samurai’ is you get these long-held moments and suddenly there’s action: boom, boom, boom!” he said.

“Melville is quite similar, especially ‘Red Circle.’ The tension builds from something that seems very normal. It’s about composition, holding the shot. The pacing and action are very naturalistic, because it’s so fast and brutal.” 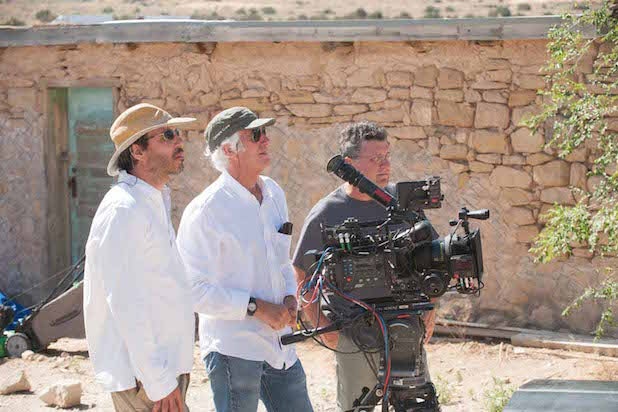 “There was a scene shot on Veracruz beach, where Alejandro was torturing this officer, drowning him in the ocean,” said Deakins. “It was wonderful, very evocative. But what it didn’t do is put the audience in Kate’s head.

“I still would have liked to see [the torture scene] as a little teaser in the opening credits, but it didn’t go anywhere. It’s much stronger that you meet Alejandro and not know straightaway what he is. Whether it’s discovering a location or a character, it’s always nice to allow the audience to evolve their picture of it rather than say, ‘Oh, here we are with a great big establishing shot.'”

In “Sicario” as seen through Deakins’ camera, action strikes as it does in life, without warning; Caught within the character’s POV, the audience gets an emotional jolt, not an action-flick spectacle.

“I love movies that are about characters, personal dilemmas that have a relationship to bigger issues,” Deakins said. “I don’t really like action movies.”