Through a bit of coincidental synchronicity, “Sicario” hits U.S. theaters the same week as “Black Mass,” and both films examine the government’s willingness to get in bed with a bad guy with the purpose of taking out a supposedly worse guy. As such, both movies will wind up in someone’s doctoral thesis about post-Osama Bin Laden cinema, but of the two, it’s “Sicario” that’s more effective as both a thriller and an examination of the shaky morality that can exist within supposedly noble efforts.

Starring as FBI agent Kate Macer, Emily Blunt serves not only as our conduit into the darker reaches of the drug war but also as our moral compass; she may wind up going to the wrong places, but it’s always for what seems to be the right reasons. As the film opens, Kate and her team, including her work partner Reggie (Daniel Kaluuya, “Kick Ass 2”), storm a house in a seemingly generic Arizona subdivision only to make some truly horrifying discoveries behind the drywall, plus a lethal booby-trap in the outside shed.

Determined to take down the kingpin behind this house of horrors, Kate allows herself to be talked into joining a governmental task force led by Matt (Josh Brolin), who claims to be a Department of Defense “adviser” but who clearly has shady connections and even shadier methodology when it comes to going after the bad guys. In no time, Kate’s on a private jet to El Paso with Matt and another adviser known to most as “Medellín” (Benicio Del Toro).

The screenplay by actor-turned-writer Taylor Sheridan keeps us as confused as Kate is, giving us (and her) information in occasional dribs and drabs. Before she can get a handle on what’s going on, she’s part of a squadron transferring a cartel higher-up from Juarez to the United States, leading to one of the film’s many action centerpieces, where a convoy of SUVs gets stuck at a bottleneck at the border, and any seemingly random car in the traffic jam could be loaded with gun-crazy narcotraficantes. 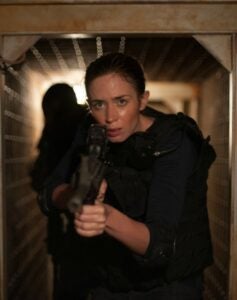 As Kate comes to understand the mission, and why she’s a part of it, the ethics get sketchier and sketchier, and “Sicario” (which, the opening title cards tell us, means “hitman”) skillfully balances being a lean, mean thriller while also saying something about the futility of the ongoing war on drugs. That it’s so suspenseful and propulsive comes as a bit of a surprise, given that director Denis Villeneuve, for all his obvious skill, has been something of a cold fish behind the camera with previous outings like “Prisoners” and “Enemy.”

Working once again with master cinematographer Roger Deakins, Villeneuve isn’t afraid to get grimy and intense here, with unexpected bursts of violence interspersed throughout. (Deakins also shoots night-vision better than anyone else around; you’ve seen lots of green figures moving through the blurry darkness in other movies, but never as vividly as he captures them here.)

Blunt makes an impression in a role that could have easily been a plot device; thanks to the actress’ empathy and Sheridan’s writing, Kate emerges as a complex, fascinating character and not the generic tough-lady that so many movies would offer. Moral ambiguity suits Brolin — there’s a moment where he whistles “Hail to the Chief” before water-boarding a cartel member, and his turn as George W. Bush in Oliver Stone‘s “W.” leaps to mind — and Del Toro’s quiet intensity provides the film with a palpable unease. (He does, at times, seem to be channeling Terrence Howard‘s brand of squint-whisper-half-smile acting, unless it’s Howard who’s borrowing it from Del Toro, of course.)

“Sicario” calls to mind the films of the 1970s — not necessarily the ones we think of as capital-I Important, but the seamy, sweaty thrillers that subtly slipped in anti-establishmentarian messages amid the violence. It mixes arthouse and grindhouse into a most satisfying cocktail.