On Sunday’s “Silicon Valley,” co-workers and arch-enemies Dinesh and Gilfoyle briefly had access to the other’s most vulnerable secrets: the ones in their phones. It was another case of “Silicon Valley” having perfect timing, because Snap Inc., the company behind Snapchat, just rolled out the dating show “Phone Swap,” in which people trade phones — horror of horrors — on a first date.

The show is simple, but that’s why it works: Two young singles show up for a date, where they’re forced to exchange phones and then immediately go in separate directions. They take turns checking out what type of cringe-worthy content they can find, while the other person sits in a booth and comments on their discoveries.

So far, no one on “Phone Swap” has thrown a phone in a toilet to protect its secrets, like Gilfoyle did on “Silicon Valley.” And despite the anxiety it caused me, I enjoyed “Phone Swap” quite a bit.

Truth be told, I’d rather lose a limb than let a stranger go through my phone. It’s not that I even have anything that scandalous on my iPhone — an embarrassing selfie or three, stupid inside jokes texted to my friends and important notifications like “shave on Wednesday” filling up my memory.

Still, it’s a fear shared by many 20-somethings (and younger), and it’s what makes the show click. Snapchatters can empathize with the discomfort of others, while, at the same time, experiencing mild schadenfreude.

The second episode, which debuted Friday, matched 21-year-old Seattle native Alexis with Joshua, a 24-year-old from Nashville. Both were dressed the part of hip, young Snapchatters. Alexis was decked out in full Canadian tuxedo (a look I approve of!) and Joshua’s striped shirt and jacket combo  combined with his mustache to make him look like a French sailor.

Alexis kicked off the snooping, spotting a shirtless pic on Joshua’s Instagram, which she thought was “nice.” She then found a grip of selfies, before checking his DMs and finding out he was an amateur rapper (“I do hip-hop sometimes,” he said, without a hint of irony). When the sides flipped, Joshua jumped into her Tinder conversations and saw she’d left a ton of guys hanging. But, other than that it, she was pretty “tame,” in his words. 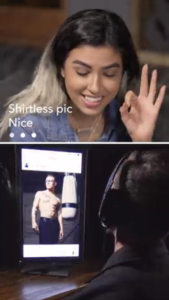 Once reunited, they both decided to “swipe right” on each other for a future date. Hurray.

For a show balling on a budget, you could do a lot worse. I’ve blasted Snap in the past for playing it safe and having two dating shows — the other being a Vice-produced vehicle hosted by Action Bronson — in its initial original content lineup. But the simplicity works well here.

A dating show doesn’t need to harken back to the halcyon days of “Blind Date” and “Parental Control” anymore. Today, a five-minute show like “Phone Swap” is tailor-made for Snapchat’s audience. The idea doesn’t reinvent the wheel, but it offers something many of its users will gravitate towards. I’m looking forward to seeing what Snap has up its sleeves for shows it puts some real money into.

If you want to check the show out, scan here.