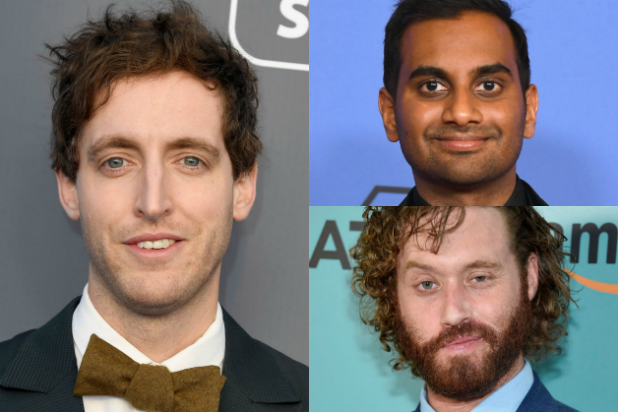 “I thought the whole Aziz Ansari thing was kind of absurd,” he said, speaking with the A.V. Club. “Like, there’s a difference between assault and just kind of strange sex.”

When asked whether the accusations against co-star T.J. Miller — who isn’t returning for Season 5 — were discussed on set at “Silicon Valley,” Middleditch said, “People who know him, sure, we chat about it.” But he also said he didn’t know enough about the situation to comment on it.

“Speaking as a guy, as a man, as a male human, it’s kind of scary, with this fervor that’s surrounding it, where an allegation can just pop up and then it’s really incumbent upon you to fervently defend your character,” he said. “I’m not gonna dive into what’s real or not. I’m just saying it’s a little bit scary.”

Middleditch added: “It is tricky, you know. It’s weird. It’s like we live in a world where currently the climate, let’s say, is where a j’accuse will really turn your world upside down.”

Middleditch said that he hopes the #MeToo movement and Time’s Up initiative don’t get “dismissed as leftist nonsense.”

He said that watching everyone comment on the movements during awards season is “tricky.”

“When everybody has something to say about it, it sometimes feels flippant, I suppose,” he said, adding that he worries some chime in beccause it’s a hot, popular topic. “So I want to make sure — which is a very cynical way of looking at it, I understand that — but I just want to make sure that all the movements that are really just and worthwhile aren’t sort of dismissed as leftist nonsense.”

Miller was accused in December of sexually assaulting and punching a woman while they were at college together. He denied her accusations, saying in a statement with his wife that the accusations were meant to “discredit” them.

“We stand together in stating this is nothing more than an unfortunate resurgence of her lies designed to wreak havoc on two happily married people in the public eye,” the Millers’ statement read. “We stand together and will not allow this person to take advantage of a serious movement toward gender equality by allowing her to use this moment to muddy the water with an unrelated personal agenda.”

As for Ansari, an anonymous woman gave an account to Babe.net of a date in which she said the “Master of None” star repeatedly pressured her for oral sex and intercourse, and at several points ignored her “clear non-verbal cues.” She said she also told him at one point: “I don’t want to feel forced because then I’ll hate you, and I’d rather not hate you.”

Ansari said in a statement that during the date, they took part in sexual activity that to him was by “all indications was completely consensual.”

“The next day, I got a text from her saying that although ‘it may have seemed okay,’ upon further reflection, she felt uncomfortable,” his statement continued. “It was true that everything did seem okay to me, so when I heard that it was not the case for her, I was surprised and concerned. I took her words to heart and responded privately after taking the time to process what she had said.”