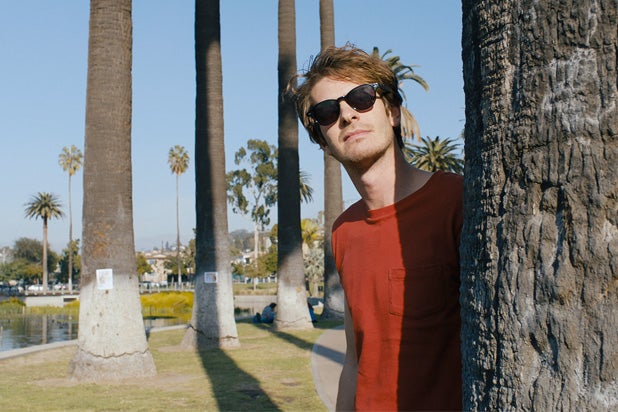 How’s this for irony? Those very same qualities that allow “Under The Silver Lake” to so thoroughly evoke both the city of Los Angeles and a certain Angelino lifestyle also turn the film into a bit of a mess. Sprawling, indulgent and with many pockets of pleasure, David Robert Mitchell ‘s film is L.A. in the same way that “Apocalypse Now” was Vietnam.

Think of it as “Ready Stoner One,” as it wrangles a rather overwhelming compendium of references, Easter eggs and winks to some of the foundational texts of contemporary millennial culture and offers them as clues in a Galaxy Brain conspiracy.

Channeling Shaggy from “Scooby-Doo,” Andrew Garfield stars as Sam, a grade-A underachiever living the dirtbag dream in (where else but) the city’s Eastside hipster neighborhood of Silver Lake. Rent is long past due and the threat of eviction looms alarmingly close, but Sam’s not too concerned. He’s got bigger fish to fry, like snooping on his topless neighbor and, uh, drinking beer with Topher Grace.

But all is not well on Glendale Boulevard. A shadowy dog killer is decimating the neighborhood’s many four-legged friends, the city’s most prominent philanthropists are up and vanishing, and Sam has finally met a girl he can vibe with, only for her to ghost him the next day.

Or did she? Because everything in seductive Sarah’s (Riley Keough) apartment has disappeared with her, leaving nothing but a cryptic insignia on the wall. So Sam diligently slips into detective mode, using his limitless supply of parking tickets as notepaper and rounding up all the usual suspects.

This being California’s throbbing hipster heart, those potential leads include alt-rockers, call-girls and aspiring actresses, played by the likes of Grace Van Patten, Riki Lindhome and Zosia Mamet, all of them delivering fresh and funny spins on different local archetypes.

The film is often quite appealing in the scene-to-scene, circling through various well-known landmarks and whichever hilariously extravagant cool-kid bar is in vogue that day. Walking into one crypt-themed watering hole below the Hollywood Forever Cemetery, Sam receives a warm welcome from one barely north-of-twenty ingénue. “It’s old music night!,” she exclaims as the opening bars to Cornershop’s “Brimful of Asha” take over and we all cringe, thinking that we didn’t feel that old when that Britpop earworm swept the radio waves of 1997.

So Mitchell can be funny at times, in fact he often is. And those familiar with his previous efforts “The Myth of the American Sleepover” and “It Follows” (both of which premiered at the Critic’s Week sidebar in Cannes) know that he intuitively grasps youth culture, and is able to wring it for tension or pathos.

He’s lost none of his verve here, but has opted to push it into overdrive, maxing out the already generous space of the film’s nearly two-and-a-half-hour run time. With animated sequences, unresolved sideplots and some devilish set-pieces that are nevertheless wholly peripheral to the overall plot, “Under The Silver Lake” often feels like the product of a talented filmmaker using his first hefty budget to empty a long developed inventory of ideas, throwing them all against the wall to see what sticks.

To the film’s credit, much of the bug-eyed exhaustion it engenders is a deliberate artistic choice. “Under The Silver Lake” is not just a gleeful tour down memory lane, you see; the film has Something To Say.

While documentarian Adam Curtis labeled the phenomenon “HyperNormalisation,” Bob Dylan just stated “something happening here, but you don’t know it is,” and that’s Mitchell’s guiding inspiration. How can one hear the signal through the noise in the age of unceasing stimuli? How does one look for clues embedded in various media at a point where all media, old and new, is available at all times?

These are heady and worthy questions to ask, and it’s a testament to the film’s ambition that it seeks to do so. And hey, maybe the only way to treat those concerns was with an equally expansive, intriguing-if-not-quite satisfying film. Just like L.A., I suppose. Lots of great places to visit, but god help you once you get lost.