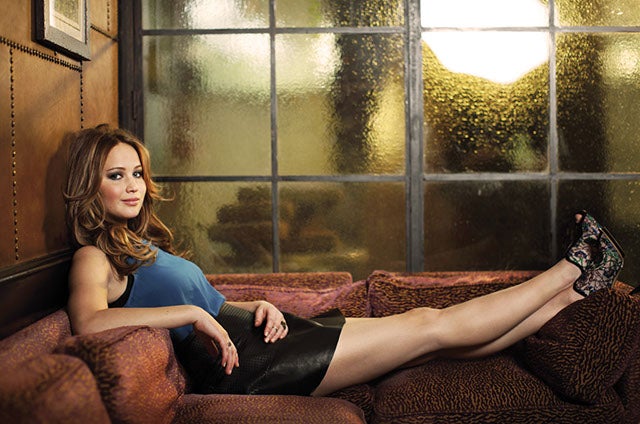 The worries began on “The Hunger Games,” where Jennifer Lawrence came to the set each day with her usual approach: lines unmemorized, attitude casual. Woody Harrelson watched his gifted co-star work, and the famously laid-back actor gave her what he figured was a real compliment: “You make me feel like I work too hard.”

But Woody’s line started to eat at Lawrence. Maybe acting wasn’t supposed to be this easy; maybe she should be poring over her lines at night, working harder, obsessing like some of her peers. “I was worried, so I brought it up to my dad,” she told TheWrap. “I said, ‘Is this bad? Do I need to be memorizing more, or saying my lines out loud?’ At the tender age of 22, Jennifer Lawrence has two Best Actress Oscar nominations, the first two years ago for her role as the fiercely determined teen trying to hang onto her house in “Winter’s Bone,” and the second for her deft, comedic (but also dead serious) turn this year as the blunt, eccentric, funny, sexy, dark, wounded and defiant young widow in “Silver Linings Playbook.”

In a year that has seen both the youngest Best Actress nominee ever (Quvenzhane Wallis, 9) and the oldest (Emmanuelle Riva, 85), Lawrence claimed another milestone: She is the youngest person to receive two lead-acting nominations.

And she makes it look easy. “I believe that people do their best work when they’re loose — and she’s very loose,” David O. Russell, her director on “Silver Linings Playbook,” told TheWrap. “She’d be on the set telling jokes and horsing around, and then she’d go into a scene and blow the roof off it. She truly inhabits every moment.” Lawrence knows that her approach goes beyond “never let 'em see you sweat” — instead, it’s more like “never sweat.” And over the course of a surprising career that began when she was 14, she has slowly and with occasional doubts learned to embrace her singular approach.

“I like to do as little work as possible, definitely,” she admitted, shrugging as she sat at a West Hollywood hotel three days after winning the Screen Actors Guild Award for Outstanding Female Actor in a Lead Role. “I think it makes it more natural and more real. There are times when I’ve been doing a scene, and we’ve gone for five or six takes, and I’m just dead. I’ve memorized what I’m saying, I’ve memorized what my co-star is saying, and it’s not real anymore.”

But how does this no-sweat, minimal effort approach result in performances like the ones she’s given in “Winter’s Bone” (above right) and “Silver Linings Playbook”? How can you do as little as possible and end up with two Oscar nominations, plus lead roles in two ongoing franchises, “The X-Men” and “The Hunger Games”? She must really be working hard and honing her craft on some level, right?

“You would think,” she said with a grin. “I don’t know, I’ve always studied people and been fascinated by their reactions and feelings. And I think that’s the best acting class you can take — watching real people, listening to them and studying them.” A pause. “I know this makes me sound like I suck, but it’s just easy for me. Some people are doctors, and doing surgery comes easy to them. Some writers, the words just fly. I have a friend who can write the most beautiful song that will break your heart in 25 minutes. There are certain things that people are just wired for.  And for me, acting is one of those things.

“I understand it — and that’s good, because it’s pretty much the only thing in the entire world that I do understand.”

David O. Russell has a favorite photo of Jennifer Lawrence. It wasn’t taken on the set of “Silver Linings Playbook,” and it’s certainly not a glamour shot — in fact, Lawrence’s face doesn’t even appear in the picture.

Instead, Russell snapped it at the recent Golden Globes ceremony, where Lawrence showed up with what she said was a 103-degree fever and then won the award for Best Actress in a Comedy or Musical. Afterward, walking through the backstage area, she grabbed a bag of potato chips — and when she got back to her seat, she set the bag in the lap of her Dior Haute Couture gown, stuck in her hand (which was sporting a huge Chopard diamond ring that she called “a snowball”) and began snacking.

“It’s my favorite picture, and it’s of her fancy, bejeweled hand in a bag of potato chips,” said Russell. “That’s our Jennifer.  She’s a surfer kid and she’s a glamorous woman.”

A Louisville native, Lawrence first acted in a MTV promo at the age of 14, then in the TBS comedy series “The Bill Engvall Show,” then in actress Lori Petty’s directorial debut, “The Poker House.” “I was really excited that people were telling me that I was good at acting, because I‘d never been good at anything in my life,” she said. “I felt stupid every day in school, and I wasn’t really athletic or happy to be doing sports. I just couldn’t find my niche, and then I finally found something.”

When she got a key role as a young Charlize Theron in “The Burning Plain,” the directorial debut of “Babel” screenwriter Guillermo Arriaga, she worried that her charmed early acting experiences might be anomalies. “I was terrified,” she said. “I had only done one other movie, and the director really liked me. But I thought, ῾I’d never done it before and I don’t know what I’m doing. Am I going to be able to do it again?’ I didn’t have any trust in myself — but when I began and it felt exactly like the first one did, I started to trust myself a little bit more.” By the time she made Debra Granik‘s “Winter’s Bone,” which debuted at Sundance in 2010, Lawrence was feeling comfortable with her process — and falling in love with the world of indie films. “That was probably the last movie I worked on where there was never a conversation about an audience,“ she said wistfully. “We just didn’t expect to have one. To go from there to the red carpet at the Oscars was truly unbelievable.”

At the same time, though, Lawrence said her ease with acting didn’t translate into all facets of the job. “I was a terrible auditioner,” she said. “I remember how frustrating it was when I would go into an audition and somebody had seen “The Burning Plain” or “Poker House,” and they’d say, ῾Based on her performance in the movie, I thought she was going to be a lot better.‘ I would feel like, I was doing a movie when I did that! You just handed me four pieces of paper and were like, ῾Act, monkey, act!’”

Still, after reading the script to “Silver Linings Playbook,” Lawrence was eager to audition for Russell, one of her favorite directors. “I thought she was just this weird onion,” she said of her character, Tiffany Maxwell, a young woman who’d used indiscriminate sex to ease her pain after the death of her husband.  “And I loved what she taught not only Bradley [Cooper]’s character but us about not always focusing on changing yourself but on liking yourself.” Russell thought Lawrence was too young for the role, but he agreed to a Skype audition on a hunch. “It seemed like a formality, like she didn’t really have a chance,” he said. “I knew very little about her, but I just had a weird intuition.”

Lawrence did the audition from her parents’ house in Louisville, jogging in place for the film’s running scenes and then crying during a pivotal sequence with Russell reading Cooper’s lines. “She has such a natural quality, just being herself in her raspy voice,” remembered Russell. “She was so real and genuine and not precious, and she took direction really well.”

After Lawrence cried, Russell asked her if she needed to get a tissue. She did, walking across the room and opening the door to a back room before she stopped and told Russell that she wouldn’t go into that room because she’d seen a huge spider there a few days earlier. “She said it was the kind of spider that folded its legs above its head,” said Russell. “And she imitated the spider in an uncanny way that was so indescribably singular and wonderful and hilarious that she absolutely enchanted me.”

Once she landed the role and showed up for work, Lawrence recalled, Russell pushed her to get real. “David was always telling me to lower my voice,“ Lawrence said. “His main note was, ῾No bullshit. Do this one with no bullshit.‘ I thought, ῾All right, I guess I’ll just take the bullshit out of it.’”

With Russell standing near the actors and shouting out instructions and new directions mid-scene, Lawrence said she found the experience of making “Silver Linings” spontaneous and challenging.

“She’ll go hard down an alley, and you’ll say, ‘No, go down this road,’ and she’ll go hard that way,” Russell said. “That’s a fantastic thing in an actor — a willingness to embrace a role, but also take direction and unflinchingly throw themselves in another direction.”

Speaking of other directions, Lawrence’s career has seemingly run on two parallel tracks: indies like “Silver Linings,” “Winter’s Bone” and “The Burning Plain” on one side, franchises like “The X-Men” and “The Hunger Games” on the other. The franchise side brings her the $10 million paydays, but the indie side is clearly where her heart lies.

“I had done indies before ‘Winter’s Bone,’” she said, “but that was the first time I could really identify that feeling of being freezing cold and on your 18th hour of free overtime, and everybody else was doing the same thing, and we were all there for the passion of what we were making. That is a feeling that you’ll never get on a studio movie. You’ll get a really nice trailer, but you’ll never get that bond with people. That is only on indies, and I long for that every day.”

Yet she’s going back to her final nine days of shooting on the second “Hunger Games” movie right after the Oscars, and then she’s doing another “X-Men” film. “The first ‘X-Men,’ I was excited to see what a giant studio film would be like,“ she said. “It seemed like it might be fun, and it was. With ‘Hunger Games,’ I loved it despite its size. I loved the script and the books and I loved everybody involved in it.

I didn’t like how big it was, and I did not want to be in another franchise. But I don’t regret saying yes, which kind of surprises me. Because I fully expected to.”

And now Lawrence is back on the awards circuit she first navigated at the age of 20. “I’m at a different place this time around,” she said. “Last time I was new to the industry, so it was an explosion, and a terrifying entrance into this business. Now I’m more comfortable, so it’s not as scary.”

Besides, said Russell, Lawrence now knows how to hold her own in any situation. “She’s not afraid to voice her opinion, whether it’s with Harvey Weinstein or me,” he said. “She’s very unfiltered and unvarnished as a person, and she’s not in this to be political.”

He laughed. “I did a Q&A with her once where she was talking about the character [in “Silver Linings Playbook”], and she said, ῾I’ve never seen a character that bullheaded but vulnerable.’ And I said, ῾You haven’t? Because you’re like that.’”