Wait for it: Ben Silverman’s new company — thus far under wraps and under the radar — is called Electus.

As in: “Chosen” (in Latin). Select. Or, in Barry Diller-speak: Bespoke. (Like suits. In England.) 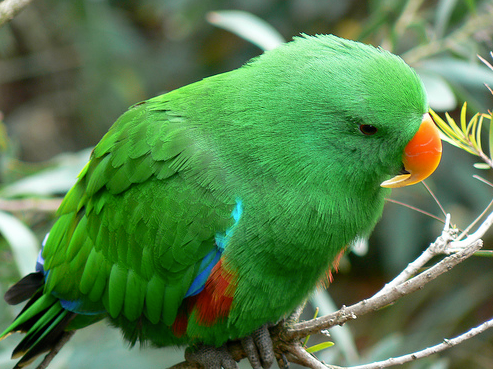 So, no, it’s not a parrot, which many of us found when we googled "electus." (I think the proper term is "eclectus," but lots of parrots come up under "electus." “The males are bright green, with bright candy corn-colored beaks and blue or red tail and wing feathers.”)

The Q3 earnings report for Diller’s Interactive Corporation (NASDAQ-NMS:IACI)  brought us a few details about it, which we checked out to find the latest on this quiet venture.

First, let’s take a minute to marvel at just how much cash Barry Diller has: $1.8 billion on the balance sheet of IAC. This must serve as a reminder that Barry can spend as damn much as he pleases on the Daily Beast, for example, for as long as he chooses, and it still wouldn’t make much of a dent.

Tina, go ahead and order drapes for your office.

Electus, meanwhile, is being capitalized at about $125 million, with Silverman in the process of closing deals with content creators including his bff Ryan Seacrest and "SNL" chief Lorne Michaels. He’s seeking to corral more than a half-dozen brand-name content creators — Ben Stiller, for one, but I hear a deal is not close — to partner them with advertising brands.

The concept is a United Artists of multiplatform content.

Together the aim is to come up with multimedia content multi-platform — read television, Internet-based, mobile, etc. — that can be monetized internationally in partnership with advertisers.

In other words — cut out the middleman. (Ad agencies beware.)

The idea is that these content creators represent the core of what advertisers are looking for. In a world where the television business model doesn’t make sense — or at least, Silverman wasn’t able to make sense of it during his time at NBC — the only way to monetize content is to be in business with the core talent, and wring the money out of every part of the process.

He isn’t wrong about that. The question is, Can it work?

Silverman declined to speak to TheWrap about any business specifics.