Simon Cowell will depart “American Idol” after this upcoming season to bring a U.S. version of his hit British reality-competiton show "The X Factor" to Fox — and he isn't ruling out taking Paula Abdul along with him. 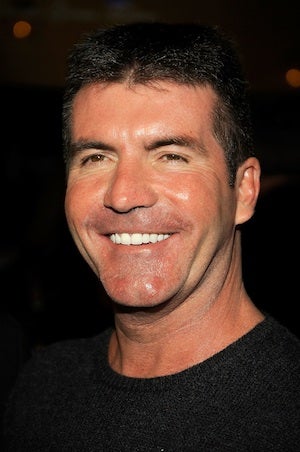 In fact, Cowell even signed the formal agreement to make the long-anticipated shift on stage, declaring, "'X Factor' starts here." The show is scheduled to air in 2011.

Asked if Paula Abdul, who left “American Idol” last summer under some acrimony — and who still has not found a permanent post-"Idol" home —  would be joining Cowell on the new show, the U.K.-based entertainer kept the door wide open.

“I adore Paula,” he said. “Whatever happens, I will be working with her in some capacity, because I miss her.”

Produced by Cowell, the British "X Factor" was devised as a replacement for "Pop Idol," the original U.K. show upon which "American Idol" was based.

As with "Idol," contestants are aspiring pop singers and performers drawn from public auditions who vie for a recording contract, though older contestans are allowed than on "Idol."

Without disclosing terms of the new deal, Cowell said the allure of overseeing a new talent show in the U.S. was too much to pass up.

“I loved that first year when I didn’t know it was going to work or not, and that’s the feeling I get from this show.”

Presiding over “Britain’s Got Talent” and “The X Factor” in the U.K., Cowell said it would be too much for him to maintain his judging duties on “Idol” while also getting an American “X Factor” off the ground.

“I can barely get away with shooting ‘American Idol’ right now,” he said, noting that “X Factor” will allow him to troll for performing talent in an even more effective way than “Idol” has.

He added that allowing older contestants was a big draw for him.

Fox officials said they have no successor lined up to replace Cowell on “Idol.”

“We have to take our time on that, make sure the chemistry between the judges is as good as it can be,” Rice said. “The current judges are wonderful, we love the interaction between them, and they have a great chemistry. What’s incumbent upon us as producers is to make sure the fun and entertainment value is maintained. We’re not going to rush into something. We’re not going to find a Simon clone. He’s one of a kind.”

Added Cowell: I genuinely believe this show can last 10 to 20 years. I’m confident this can remain the No. 1 rated show.”

Rice told the group that considerable effort was made to get the contract hammered out so that it could be announced at Monday’s executive session.

In fact, he said no agreement was in place until just a few hours before the noontime session — which ended up kicking off half an hour late due to the last-minute haggling.

While internal discussions about a Cowell replacement for “Idol” have taken place, no one has formally been reached out to.

Despite the uncertainty looming over the show, both Rice and Reilly about adding another talent-competition show to a lineup that already includes “Idol” and “So You Think You Can Dance.”

All three shows will provide a “backbone” to the Fox prime-time schedule, delivering a two-hour competition show plus a one-hour results broadcast.

“We’re very excited about having that 52-week-a-year spine,” Rice noted.

When asked about adding Abdul to "X Factor," Rice blanched.

"I think its too early (to speculate)," he said. "We wanted very much for her to be part of 'Idol,' and she chose not to."