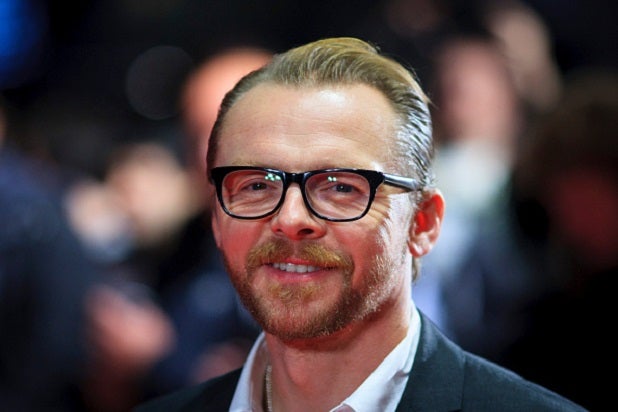 Simon Pegg is in negotiations to join Steven Spielberg‘s “Ready Player One,” an individual familiar with the project has told TheWrap.

Based on the best-selling book by Ernest Cline, “Ready Player One” concerns the Oasis, a virtual-reality universe that humans in the not-too-distant future come to prefer to living in the real world. The story begins when the founder of Oasis dies and offers his fortune up in a treasure hunt that brings out all kinds of contestants, including a teenager named Wade Watts, who will be played by Tye Sheridan.

Olivia Cooke (“Me and Earl and the Dying Girl”) is set to play the female lead in the film, which was written by Zak Penn. Ben Mendelsohn will play the villain, an executive for an Internet corporation that has designs on Oasis.

Pegg will play Ogden ‘Og’ Morrow, the co-creator of Oasis and best friend of creator James Halliday. Despite being rich, Og is humble and respects his deceased friend’s game, and the hunt for the egg. His backstory is said to parallel that of Apple co-founder Steve Wozniak and his eventual relationship with Steve Jobs. Og lives in Oregon and owns a set of very advanced Oasis consoles and immersion rigs.

Pegg recently played Unkar Plutt in “Star Wars: The Force Awakens,” and he next stars in “Star Trek Beyond,” which he also co-wrote. Paramount will release the film on July 22.

Pegg is represented by UTA, and his casting was first reported by THR.