Olympic gymnast Simone Biles was at the top of her game when the 2020 Summer Olympics in Tokyo were postponed due to the coronavirus and said that unexpected change, and tensions with the USA Gymnastics organization, prompted her to consider retiring early from the sport.

In a new Facebook Watch docuseries called “Simone Vs Herself,” Biles reveals how the pandemic affected her mentally and also physically — the 24-year-old world champion said she thought she came down with coronavirus but eventually found out it was just an unrelated viral illness.

“Simone Vs. Herself” is a seven-episode series directed by Gotham Chopra and produced by Religion of Sports. The first episode premieres on June 15 on Facebook. The title of the show comes from Biles’ seemingly never-ending drive to be the best: she says in the first episode, “Once I step onto the competition floor, I am competing against myself. But I’ve always been trying to compete against myself since I was at a young age.”

Before the 2020 Summer Olympics were postponed, Biles went through a COVID-19 scare. She said she was “almost positive” she’d come down with the coronavirus and was concerned, especially because she’d attended an event with “thousands of people in Times Square” to promote a TV show shortly before she started feeling ill.

“I had every symptom, except cough and a fever,” Biles says in a scene in “Simone Vs Herself” where she meets with a Team USA physician.

Fortunately, Biles didn’t have COVID and made a full recovery. She continued to train throughout early 2020 in anticipation of the Summer Olympics still happening, even while rumors swirled that they would probably be canceled — or at the very least, postponed. Parts of “Simone Vs Herself” were filmed while this was going on, and as 2020 went on and the pandemic got worse, it’s also visibly obvious in the docuseries that Biles is also getting more and more upset at the prospect of not competing.

And that makes perfect sense; Biles has devoted almost her entire life, from the time she was 6 years old, to becoming the absolute best in women’s gymnastics, and she’s got four Olympic gold medals to prove it. But Biles — like many of us — found it hard to keep herself motivated during the pandemic. 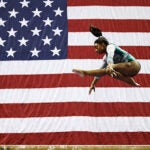 “I’m getting older, I’m tired, it’s getting harder to get up and go to the gym. I’m walking in two minutes before practice starts,” Biles said. “I’m like, who am I, this isn’t like me, but I seriously can’t get up in the morning.”

Hearing Biles, who’s only 24, say she’s feeling old might seem jarring, but in a sport as tough on your body as gymnastics, competitors often retire before they’re in their mid-30s. The oldest female Olympic gymnast, Oksana Chusovitina, is 45 and won her first Olympic gold medal in 1992.

“Really, I’m only good at gymnastics. I have nothing else to fall back on,” Biles said in the series with eyes wide. “I’ve given up everything in my life to do this, what I love so it’s kind of like I’m out of luck at the end of the day.”

Biles said she contemplated quitting gymnastics completely at the beginning of the pandemic. “Well, if they cancel the Olympics, I’m quitting. I can’t do this any longer,” she tells someone off-camera.

Biles has been open about the fact that she plans to retire from Olympic competition after this year’s summer games. Biles was one of hundreds of Team USA gymnasts sexually abused by physician Larry Nassar but the only gymnast at the elite level to report the assaults and continue competing. She told Vogue that dealing with the organization was part of what made her dread waiting longer to compete in the Summer Olympics.

“I felt kind of torn and broken,” Biles told Vogue about finding out the Summer Olympics were postponed to 2021. “Obviously, it was the right decision, but to have it finalized, in a way, you feel defeated because you’ve worked so hard. We were gripping at the bars, and I just started crying. Another year of dealing with USAG. That, I don’t know if I can take,” Biles said she thought at the time.

Fortunately for Team USA and the legions of fans Biles has inspired, she didn’t retire and is gearing up for this year’s Summer Olympics which kick off with opening ceremonies July 23. Biles will compete in the women’s gymnastics events July 29, where she will have the chance to be the first woman to repeat winning as an Olympic all-around champion since 1968.

Take a look at the trailer for “Simone Vs Herself” at the top of the page.

The first episode of “Simone Vs Herself” debuts June 15 and new episodes will release weekly each Tuesday on Facebook Watch.