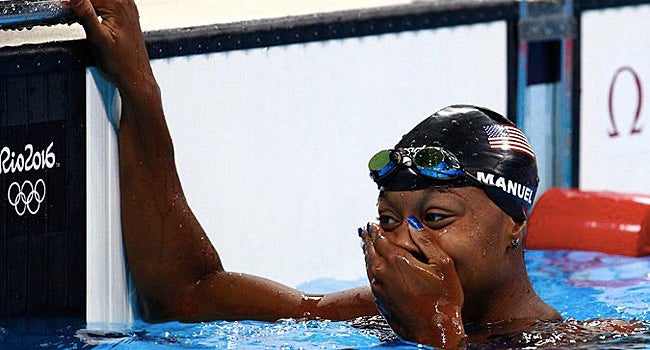 Simone Manuel won a gold medal at the Rio Olympics on Thursday — and secured her spot in history.

The 20-year-old became the first African-American woman to win a gold in an individual swimming event when she tied with Canadian Penny Oleksiak in the 100 freestyle.

“I hope that I can be an inspiration to others, so this medal is for the people who come behind me and get into the sport and hopefully find love and drive to get to this point,” Manuel said afterward, according to NBC.

The Stanford student went on touch on “some of the issues with police brutality.”

“I think that this win helps bring hope and change to some of the issues that are going on in the world, but I mean, I went out there and swam as fast as I could, and my color just comes with the territory,” she said.

Manuel’s groundbreaking victory and Olympic-record time of 52.70 seconds won accolades from fellow athletes and entertainment stars alike in an outpouring of love on social media.

See some of the tweets below.

.@simone_manuel pushes the door wide open inspiring others. This is what the #Olympics are all about. #100mfreestyle pic.twitter.com/B9HIoXowmW

Simone Manuel has me choked up…her emotion is so genuine and special to watch!!

Simone Manuel, Simone Biles, and Misty Copeland give me that "black girls rock" feeling in my heart. I just be cheesin when I watch them ????

Simone Manuel. We did it. #Rio2016 pic.twitter.com/zD7rHCXnSJ

Simone Manuel just annihilated a field and a stereotype #Rio2016

From Copacabana Beach to the Tijuca National Forest, Brazil’s “marvelous city” has some of the most spectacularly sited venues of any Olympics

Venue: Copacabana Beach
Event: Beach Volleyball
One of the world’s longest, widest and most famous beaches will play host to one of the Rio Olympics’ showpiece events, beach volleyball.