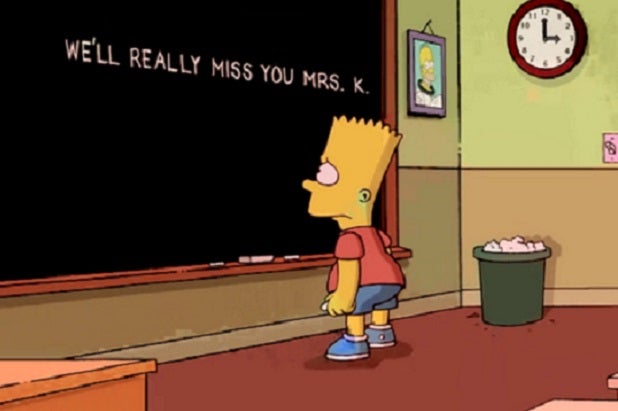 “The Simpsons” paid Marcia Wallace, who died last week, the show’s ultimate compliment at the opening of Sunday night’s episode.

“We’ll really miss you Mrs. K,” scrawled Bart on the chalkboard in the sequence that begins each episode of the long-running Fox animated hit.

It was a reference to Edna Krabappel, Bart’s oft-tormented teacher who was voiced for years by Wallace.

In addition, Fox aired a 1992 episode of the show for which Wallace won an Emmy as the lead-in to Sunday’s new show. In the classic episode “Bart the Lover,” after Edna (Wallace) gives Bart a month of detention, he gets his revenge on her by responding to her newspaper singles ad.

Wallace, also known for her work on “The Bob Newhart Show,” died at age 70 from breast cancer last week.