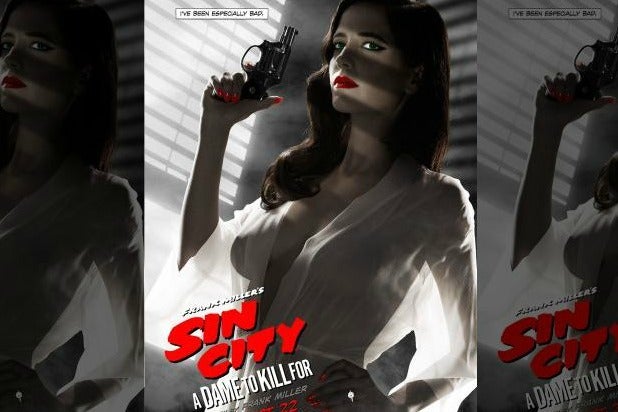 It took directors Robert Rodriguez and Frank Miller nine long years to bring “Sin City: A Dame to Kill For” to the big screen. Unfortunately, critics suggest the sequel was not worth the wait.

Also read: Joseph Gordon-Levitt Is Star of ‘Sin City’ and Male Feminist: ‘It Benefits Society as a Whole’

While the strong visual style consisting of black-and-white frames speckled with streaks of bloody violence remains intact, the brutality in Miller’s noir failed to excite critics, and many complained the four interwoven stories were not as compelling, either.

TheWrap‘s Alonso Duralde described it as “dull,” and full of “so, so much narration” that sunk a lot of the fun.

“This is Rodriguez’s second sequel in a row, following last year’s ‘Machete Kills,’ in which he turns sex, violence and general exploitation into an occasion for dullness. All either movie had to be was entertaining, but neither accomplishes that task; for a film loaded with decapitations and gun-toting ladies in bondage gear, ‘Sin City’ gets really tedious really quickly,” Duralde wrote in his review. “Both Rodriguez and Miller have excelled in taking old genre tropes and making them slick and exciting for new audiences. ‘Sin City: A Dame to Kill For’ brings the slickness, so much so that everything else just slides off of it.”

He did, however, join the chorus of critics praising newcomer Eva Green (“Casino Royale”) for her daring performance as the film’s titular femme fatale, or as LA Weekly critic Amy Nicholson put it, the movie’s “best special effect.”

“Green is sexy, funny, dangerous and wild — everything the film needed to be — and whenever she’s not on screen, we feel her absence as though the sun has blinked off,” Nicholson, who took issue with the rest of the female characters, wrote. “She strips off more than Alba yet she’s never just eye candy — she’s a full meal. In a movie that treats women like chew toys, Green is powerful, even when she plays weak.”

The Boston Globe‘s Tom Russo thought Gordon-Levitt was “a cool presence,” and found Brolin’s portion of the film with Green to be the most amusing, but he warned “other stories range from pretty good to not good at all.”

“You could cruise into ‘Sin City’ late and clear out after Brolin and Gordon-Levitt take their bows and not miss a thing,” he wrote in a 2.5 star review that Rotten Tomatoes tallied as positive praise.

San Jose Mercury News critic Randy Myers was also counted as a critic painting a positive picture, but his review wasn’t entirely nice. He pointed out the missing “crucial sucker punch” needed at the end of the film, yet recommended the 3D viewing experience, anyway.

“Like every chapter in this film, the otherworldly visuals are revolutionary, and the 3-D only enhances that experience. While ‘Sin City: A Dame to Kill For’ does have its problems, technical achievements are not one of them,” Myers wrote. “Does this artistry help us overlook the anticlimactic finale? Not enough. Yet I still recommend ‘Frank Miller’s Sin City: A Dame to Kill For’ — since three out of four isn’t bad at all.”

“It covers the same ground Robert Rodriguez’s and Frank Miller’s ‘Sin City’ did in 2005, to diminishing returns. It’s a pulpy bare-knuckle bruiser with a gorgeous black-and-white look, bringing to life the pages of Miller’s grim graphic novels,” Graham wrote. “But all the tough talk, booze-swilling and shadowy beheadings (in this case, roughly 514 of them) can’t disguise the fact that this rehash lacks the sick fun of the original, instead leaving a bad taste behind, along with a feeling of been-there, done-that.”