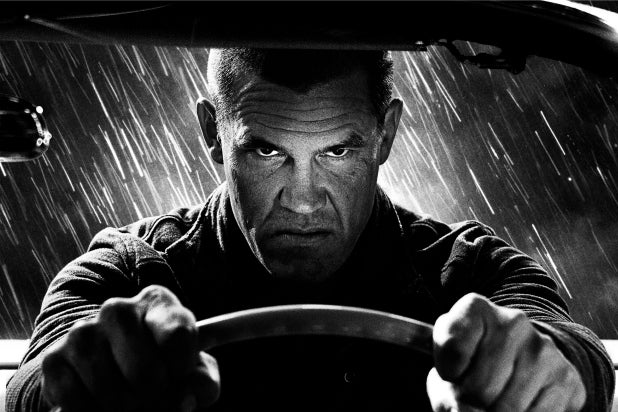 A fake film noir seemingly designed for people who never have and never will see a real one, “Sin City: A Dame to Kill For” seeks to pay homage to the graphic novel format by re-imagining Frank Miller‘s tome as a feature film; unfortunately, the big screen and the 3D merely call attention to the aspects of the printed page that either don’t work or don’t translate easily from one medium to another.

First of all, there’s the narration — so, so much narration, with so many deafening inner monologues laid over so many scenes of people drinking, driving, grimacing or stripping without taking their bras off. (The latter is the sole domain of Jessica Alba‘s Nancy, but more on her in a moment.)

Add to that a ridiculously thick layer of sexism, with every woman in the film portrayed as a prostitute, stripper or man-trap. There’s a policeman’s wife who dares to be over the age of 40, and is thus cheated upon at the earliest moment, and a vengeance-driven dancer who — even though she’s a crack shot — has to mutilate herself to get a man to help her carry out her vendetta. Heaven forbid she have her own agency in a story like this, one that teeters on self-parody but lacks the sense of humor required to take the plunge.

As with its predecessor of nine (!) years ago, this second “Sin City” sees directors Miller and Robert Rodriguez shooting their actors on green-screen and surrounding them with animation and hyper-stylized lighting and art direction to make the movie look as much like a comic book as possible. It’s a clever gimmick for about 10 minutes, but then you start noticing how the actors have been directed not to move their faces much, so that they’ll look more characters on a page.

The blank expressions (and that crushing narration) merely underscore the fact that lines like “She didn’t deserve a second thought — and I couldn’t get her out of my mind,” work much better on the page than they do spoken out loud.

If the three stories in “A Dame to Kill For” meshed well in Miller’s original book, they merely brush shoulders awkwardly on film. Gambler Johnny (Joseph Gordon-Levitt) bests corrupt politician Rourke (Powers Boothe) at the poker table but comes to regret it. Rourke becomes a target for Nancy, because the senator killed her lover (Bruce Willis, who appears periodically as a passive-aggressive ghost). And private eye Dwight (Josh Brolin) finds himself ensnared by the wiles of his ex Ava (Eva Green), a literal femme fatale with a rich husband and a wicked soul.

Also read: Joseph Gordon-Levitt Is Star of ‘Sin City’ and Male Feminist: ‘It Benefits Society as a Whole’

Green is the only female performer who sees through this movie’s ludicrousness and dares to one-up it. Her nudity feels defiant — she and even Brolin show a lot more skin than any of the strippers — and she turns Ava’s rapaciousness into one of the few tangible objects in this movie made up principally of special effects. (Mickey Rourke, once again, brings soulfulness to the role of Marv, a monstrous tough-guy with a heart of tin.)

This is Rodriguez’s second sequel in a row, following last year’s “Machete Kills,” in which he turns sex, violence and general exploitation into an occasion for dullness. All either movie had to be was entertaining, but neither accomplishes that task; for a film loaded with decapitations and gun-toting ladies in bondage gear, “Sin City” gets really tedious really quickly.

(And on a side note: Is anyone else skeeved out by the fact that Rodriguez once cast 13-year-old Alexa PenaVega as a smart and spunky Spy Kid but now gives the 26-year-old actress roles as strippers and whores?)

Both Rodriguez and Miller have excelled in taking old genre tropes and making them slick and exciting for new audiences. “Sin City: A Dame to Kill For” brings the slickness, so much so that everything else just slides off of it.