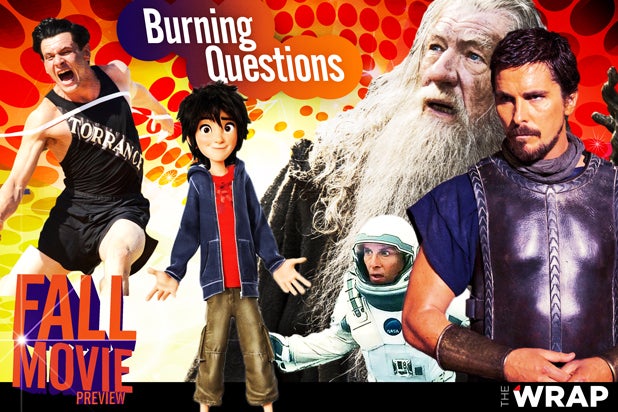 Outside of a surprise from Marvel or Michael Bay‘s continued hypnosis on the world’s moviegoers, it was a subpar summer for Hollywood — both at the box office and more significantly, with critics, who hated just about everything save “Guardians of the Galaxy,” and “Snowpiercer.”

Luckily, the coming fall movie season looks promising, both in terms of Oscar contenders and potential blockbusters. For example, Paul Thomas Anderson (“Inherent Vice”) and David Fincher (“Gone Girl”) both have high profile crime movies premiering at the New York Film Fest. Tim Burton (“Big Eyes”) is returning to original drama, Christopher Nolan“>Christopher Nolan (“Interstellar”) is going further into the imagination than ever before, and Disney is bringing beloved musical “Into the Woods” to the big screen with the biggest names available.

Also read: Fall Forecast: Can These Three Movies Save the Box Office?

Of course, nothing is guaranteed in this business, with the Internet’s ability to sway the narrative on a film in a single tweet, and the audience’s tendency to binge watch “Scandal” instead of going to the theater. So, TheWrap has looked ahead to single out some of the biggest questions that Hollywood will face this fall, and done our best to predict the outcomes.

Will there be one too many tough guys?
Liam Neeson‘s “A Walk Among the Tombstones” and Denzel Washington‘s “The Equalizer” open a week apart in September, and it’s hard to imagine the two veteran action stars won’t cut into each other’s box office. The question is, which one will be hurt the most? “Tombstone” comes out first on Sept. 19, and that could give it an edge. Neeson’s coming off hits with action films “Non-Stop” and “Taken 2.” But how long can he keep it going? Washington is one of the most dependable actors at the box office, and “The Equalizer” reteams him with his “Training Day” director Antoine Fuqua.

Crowded Christmas: Who Will Grinch flinch?
There are currently five movies scheduled to open on Christmas Day — that’s a lot, since “Annie,” “The Hobbit” finale and “Night at the Museum: Secret of the Tomb” will have opened days earlier. Universal’s Louis Zamperini biopic “Unbroken,” directed by Angelina Jolie and written by the Coen brothers, looks like a Best Picture frontrunner and isn’t going anywhere. Disney’s Rob Marshall-directed musical “Into the Woods” in theory has awards potential as well. That leaves two comedies, Paramount’s “Hot Tub Time Machine 2,” Seth Rogen and James Franco‘s “The Interview,” and the Weinstein Company’s family tale “Paddington.” If somebody doesn’t move, there will be blood on the trees.

Can “The Hobbit” finale be the biggest in the series, or is the magic running out?
We are now six films into Peter Jackson‘s foray into Middle Earth, and three into the adaptation of a single book. While the final film in the first trilogy, “Lord of the Rings: The Return of the King” won 11 Oscars including Best Picture, the new saga hasn’t been quite as well-received — averaging a 69 percent fresh rating on review aggregation site Rotten Tomatoes. Additionally, last year’s entry made $958 million, which, while monstrous for most movies, actually fell short of the $1.17 billion gross of the 2012 film. Still, this is the final film in a franchise that has been around for years, which makes it a strong sentimental draw, and Warner Bros. knows how to pull off show-stopping finales (see: Harry Potter and “The Return of the King”).

Will “Mockingjay” be the year’s biggest movie?
Though it fell below Disney’s “Frozen” and in global sales, the second “Hunger Games” film, “Catching Fire,” was the biggest box office success in the U.S. last year. The new film, with additional stars like Julianne Moore and the returning core led by Jennifer Lawrence, should do even better. Plus, it’s been a weak year at the box office in 2014. So far, is the top film with $259 million, and even if that number is eventually surpassed by or “Guardians of the Galaxy,” the new “Hunger Games” should have no problem towering over the competition.

Will the Marvel connection make a difference for “Big Hero 6” with unfamiliar moviegoers?
It’s hard to say anything is a risk for Disney after seeing the smash success of “Guardians of the Galaxy,” especially where Marvel is concerned. But “Big Hero 6” is the Mouse House’s first real effort to blend its traditional big screen animation strength with its comic book gold mine. So it’s hard to say how much of the fanboy audience and the classic cartoon audience overlap — especially because unlike their Disney Channel programs, this isn’t based on classic properties like “Avengers” or “Spider-Man.”

Can Robert Downey Jr. have a hit movie without Tony Stark?
The last six years have been very kind to Robert Downey, Jr., who is now arguably the biggest movie star in the world. It was without question that Downey’s charisma helped make “Iron Man” a billion-dollar franchise, and Guy Richie’s version of “Sherlock Holmes” probably wouldn’t be a smash hit without him. But other than “Tropic Thunder,” he hasn’t had any real hits outside of those franchises since then — not that he’s had that much time. It will be curious to see how much his star power can help float a legal drama — from the director  of “Wedding Crashers” and “Fred Claus.”

Will “Exodus: Gods and Kings” be blessed?
It seems like a package sent from heaven: Oscar-winner Christian Bale and legendary director Ridley Scott teaming up on a big budget Bible film in the year of the religious movie. But the story of Moses and the Jews in Egypt has already been plagued with controversy — Bale is playing Moses, the Hebrew savior who was most definitely not a white Brit. Plus, as we saw with Darren Aronofsky‘s version of “Noah,” Christian audiences are quite discerning and even picky in many cases. Dare to tweak the folklore in the Bible, and you’re going to get backlash. Of course, these objections are largely just Internet fascinations, and there’s still every chance that audiences will rush to the theater for this epic experience.

Will “Interstellar” open bigger than “Gravity” or?
The “Dark Knight” trilogy helped make Christopher Nolan a household name — and a fanboy hero — but it was “Inception,” the multi-layered mind trip released in between the second and third Batman movies, that earned him two Oscar nominations, for writing and producing. It was a big, complicated and gorgeous territory that he looks to revisit — and transcend — with “Interstellar.” A spiritual descendant of Kubrick’s “2001,” the film stars two recent Oscar winners in Matthew McConaughey and Anne Hathaway (with Michael Caine and Jessica Chastain in none-too-shabby supporting company).

The potential billion dollar question: Will that translate to box office success? Well, the mind-bending “Inception” opened to $62 million in 2011, and last year’s space epic, “Gravity,” made $55.7 million in its first weekend in the U.S. en route to $716 million worldwide and a Best Director Oscar for Alfonso Cuaron. Simply put, audiences are not afraid of sci-fi now and neither are Oscar voters, so don’t bet against Nolan.

How dumb are we?
Nostalgia rules the Internet, but does it help box office? After countless rumors and a few seemingly false starts, Harry and Lloyd are returning in “Dumb and Dumber To,” a whole 20 years after the original lovable moron comedy took in a whopping $247 million worldwide and made stars of the Farrelly Brothers and cemented the A-list status of Jim Carrey and Jeff Daniels. But it’s been a rough decade or so for the Farrellys, and to a lesser extent Carrey. So they could really use a hit. The thing is, idiot comedy has been taken to stratospheric new levels by the likes of Will Ferrell and his cohorts, so it remains to be seen if the old pros can rise to the new challenge.

For the record: A previous version of this story incorrectly stated Christopher Nolan had received an Oscar nomination for directing “Inception.”