Sinead O’Connor has apparently had a change of heart about her family.

A day after calling her relatives “child stealing murderers,” the “Nothing Compares 2 U” singer took to Facebook on Tuesday to beg her clan to visit her.

In an emotional post, the singer claimed that her children and family visited her in the hospital, but she wasn’t awake for the visit, and now wants them to return.

“To my children and family. You came to the hospital to see me on life support. You left before I woke and you haven’t been back. Please why are you doing these things to me?? I need you. I need your love. I can’t manage what’s being done to me,” the singer wrote. “I didn’t do anything to deserve the way I’m being treated. I did not leave my kids either! As Mary falsely says I did. That is simply untrue. The kids asked not to be with me during the recovery from surgery.”

The tone is dramatically different from that of her posts on Sunday and Monday.

“Jake, Roisin, Jr., Frank, Donal, Eimear, I never wanna see you again,” she wrote on her Facebook page Monday. “You stole my sons from me. Then you had hypocrisy to come to hospital and then not be here when I wake and not pick up phone? I’m shit to you. You’re dead to me,” O’Connor wrote. “You killed your mother. You stole my sons. You left me alone for twelve weeks! Why did I have to hear it was your hypocritical asses here while I was unconscious?? And now you’re Gone and not picking up phone? You are child stealing murderers, I never want to see or hear from any of you again.”

The singer, 48, went on to blame her mental health issues on her family, including her son Jake and ex-boyfriend Irish musician Donal Lunny, calling them “liars” and “hypocrites.”

On Sunday, O’Connor threatened suicide, claiming that she had overdosed.

“I have taken an overdose. There is no other way to get respect. I am not at home, I’m at a hotel, somewhere in Ireland, under another name,” the singer wrote.

Police in Dublin, Ireland, later confirmed that O’Connor had been “found safe and well” and was receiving medical treatment. In the past, the singer, who suffers from bipolar disorder, has discussed her struggle with mental health. 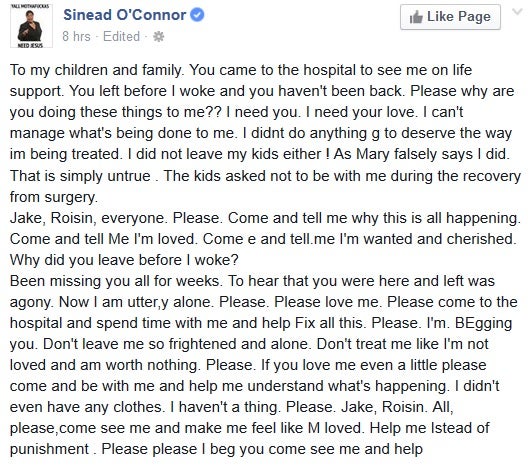