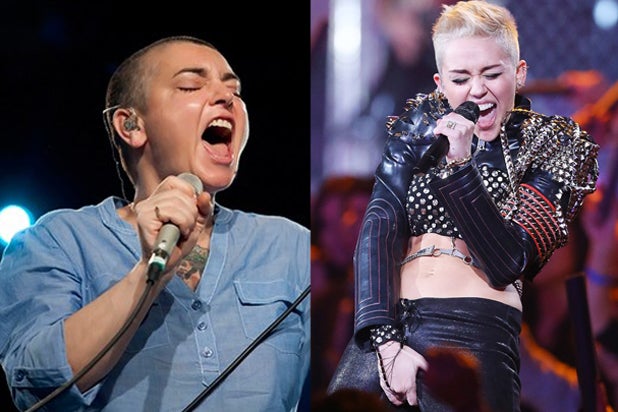 Sinead O’Connor wrote an open letter to Miley Cyrus on Thursday in response to Cyrus’ statements that she based the video for “Wrecking Ball” on O’Connor’s 1990 hit, “Nothing Compares 2 U.” It seems that the Irish songstress was not flattered by the comparison.

In response, Cyrus tweeted about another young female she found to be similar to O’Connor: troubled actress Amanda Bynes, who spent much of the summer in a mental hospital following months of strange behavior.

“Before Amanda Bynes…. There was…” Cyrus tweeted with a screenshot of a tweets from an account she apparently believed was O’Connor’s pleading for psychiatric help. Though the Twitter account was not O’Connor’s, the singer did post suicidal tweets in 2011 and has struggled with mental illness for years.

On the cusp of Cyrus’ “Saturday Night Live” hosting/performing gig this weekend, O’Connor — whose own “SNL” appearance ended up being one of the show’s most controversial moments ever (she ripped up a photo of the Pope; people were very angry) — told the tongue-loving star that she didn’t think they were as similar as Cyrus had hoped.

Though her words were harsh at times, O’Connor wrote that they were all “said in the spirit of motherliness and with love.”

“I am extremely concerned for you that those around you have led you to believe, or encouraged you in your own belief, that it is in any way ‘cool’ to be naked and licking sledgehammers in your videos,” O’Connor wrote. “It is in fact the case that you will obscure your talent by allowing yourself to be pimped, whether it’s the music business or yourself doing the pimping.”

O’Connor also told Cyrus that their looks were nothing alike, though Cyrus had said she based her partially shaved head on O’Connor’s own: “The look I chose, I chose on purpose at a time when my record company were encouraging me to do what you have done. I felt I would rather be judged on my talent and not my looks.”

There was a bright spot for Cyrus, though: O’Connor made it clear that she respected the singer’s talent. “Your records are good enough for you not to need any shedding of Hannah Montana,” O’Connor wrote. “She’s waaaaaaay gone by now.. Not because you got naked but because you make great records.”

“Whether we like it or not, us females in the industry are role models and as such we have to be extremely careful what messages we send to other women. The message you keep sending is that it’s somehow cool to be prostituted.. it’s so not cool Miley.. it’s dangerous.”