Conventional wisdom says video game-turned-movie “Assassin’s Creed” will be in battle with space romance “Passengers,” starring Jennifer Lawrence and Chris Pratt come Christmastime. But it’s the family-friendly animated feature “Sing” that is emerging as the top box office contender of the films opening on the holiday weekend of Dec. 21.

All three films are in battle for No. 2 as “Rogue One: A Star Wars Story” should easily beat all newcomers in its massive second-weekend wake. (The Lucasfilm prequel is still on track to open in the ballpark of $150 million on Dec. 16.)

Different prognosticators are saying different things. One has Illumination Entertainment and Universal’s “Sing,” featuring Matthew McConaughey and Reese Witherspoon, opening at $37 million during the three-day weekend and $55 million when you expand that out to the long five-day Christmas holiday weekend.

That same tracker has the Michael Fassbender-starring action fantasy flick “Assassin’s Creed” debuting at just $20 million during the three days and $33 million over the five days. “Passengers” will come in higher at $26 million over three days that same weekend and $39 million for the five-day holiday, according to the same set of estimates.

But all early estimates rank “Sing” as the top newly opening wide release opening that weekend with it surpassing $80 million on the high end of six-day estimates (factoring in the following Monday, which most people have off). All prognosticators have Columbia Pictures’ space travel film as the second highest grossing of the weekend and New Regency and Ubisoft’s video game movie, being distributed by 20th Century Fox, as the third.

According to these figures, the overall box office ranking for the weekend will be as follows:
1. “Rogue One: A Star Wars Story”
2. “Sing”
3. “Passengers”
4. “Assassin’s Creed”

It will be highly competitive for all movies landing a week after “Rogue One,” said comScore senior analyst Paul Dergarabedian. “‘Assassin’s Creed,” “Passengers” and “Sing” arrive into an incredibly crowded late year marketplace,” he told TheWrap.

One count against the Fassbender title: video game-based movies have a bad track record. But Dergarabedian said, “‘Assassin’s’ could post even better-than-expected results and give the competition a run for its collective money,” adding that the family-friendly allure of “Sing” could put the other more serious-minded newcomers and holdovers in check. “Lesson: never underestimate the power of light-hearted family fare in a sea of heavier films that are chasing essentially the same group of sci-fi and action film fans,” said the analyst. “‘Sing’ could be a giant killer.”

If you look at what’s buzzing on social media right now, the fate of Christmas weekend’s box office becomes slightly less clear. According to comScore’s PreAct tool, more people are talking about “Assasssin’s Creed” than “Passengers” — but not by much. As for “Sing,” it’s not yet registering in the top ten (see chart below). 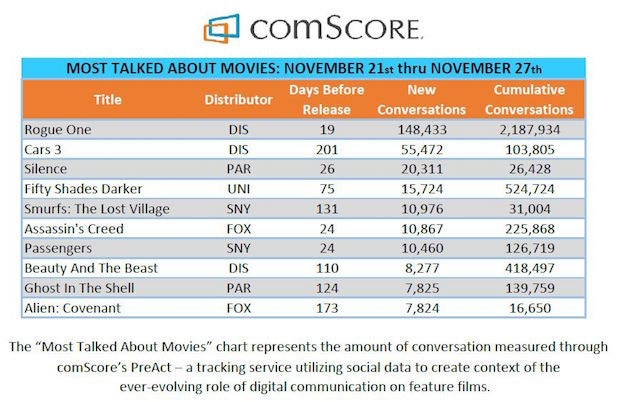 “Passengers” was directed by Morten Tyldum and revolves around two spacecraft passengers who are awoken 90 years too early as they travel to a distant planet.