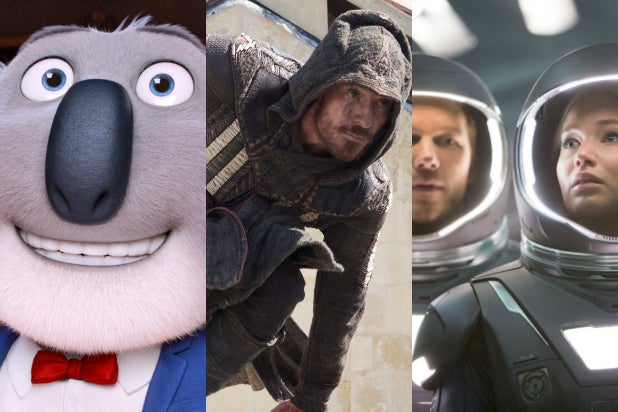 Family-friendly animated feature “Sing” has emerged as the top box office contender among new wide releases opening over the long holiday weekend of Dec. 21, poised to beat out both “Assassin’s Creed” and “Passengers.”

All three new titles are up against “Rogue One: A Star Wars Story,” which should have a relatively easy time beating the newcomers in what is assumed to be a massive second-weekend wake. (The Lucasfilm prequel opened to a huge $155 million domestically this past weekend.)

Illumination Entertainment and Universal’s “Sing,” featuring Matthew McConaughey and Reese Witherspoon, is expected to reach up to $70 million over the long six-day Christmas holiday weekend (from Wednesday through Monday) to come in under “Rogue One.” Not bad at all for a film that was made for roughly $75 million and is opening in roughly 4,000 theaters.

The Michael Fassbender-starring action fantasy flick “Assassin’s Creed” is set to debut at around $37 million over the six days. But “Passengers,” with Jennifer Lawrence and Chris Pratt, will come in higher at up to $50 million.

According to these figures, the overall box office ranking for the weekend will be as follows:
1. “Rogue One: A Star Wars Story” (Disney/Lucasfilm)
2. “Sing” (Universal/Illumination)
3. “Passengers” (Sony/Columbia)
4. “Assassin’s Creed” (Fox/Ubisoft/New Regency)

It will be highly competitive for all movies landing a week after “Rogue One,” said comScore senior analyst Paul Dergarabedian. “‘Assassin’s Creed,’ ‘Passengers’ and ‘Sing’ arrive into an incredibly crowded late-year marketplace,” he told TheWrap.

Fox comedy “Why Him?” opens in theaters on Friday and is expected to reach up to $20 million during its four-day opening. The film is about a father who becomes deeply competitive with his daughter’s wealthy boyfriend and stars James Franco, Bryan Cranston and Zoey Deutch.

Awards season contender “Fences” expands wide starting on Christmas Sunday and is expected to earn up to $9 million during its two-day opening frame. Paramount Pictures’ Denzel Washington-directed period drama made an estimated $128,000 from four locations in New York and Los Angeles last weekend, earning a strong per theater average of $32,000.

“Sing” revolves around a theater-owning koala named Buster Moon (McConaughey) and also features the voices of Seth MacFarlane, Scarlett Johansson, John C. Reilly, Taron Egerton, Nick Kroll and Nick Offerman. It should hold solid numbers as it continues to play into January and critics are warming up to it — it has a 73 percent on Rotten Tomatoes so far.

“Lesson: never underestimate the power of light-hearted family fare in a sea of heavier films that are chasing essentially the same group of sci-fi and action film fans,” said Dergarabedian. “‘Sing’ could be a giant killer.”

“Passengers” was directed by Morten Tyldum and revolves around two spacecraft passengers who are awoken 90 years too early as they travel to a distant planet. It was made for $110 million, not counting tax incentives and marketing, and will play in roughly 3,300 locations. Critics aren’t loving it either, as it has an early Rotten Tomatoes score of 32 percent.